Marva Wright, the powerhouse New Orleans blues and gospel belter who left her job as a school secretary to sing around the world was enormously popular among fellow musicians in The Big Easy. Ms. Wright was an impressive live performer who moved easily between gospel spirituals and bawdy blues romps. In her late-blooming career, she released albums on local and international record labels, and performed across Europe, in Russia and Brazil, and at blues festivals around the United States. She drew large crowds at the New Orleans Jazz and Heritage Festival presented by Shell, and staged an annual Christmas concert at Tipitina’s.

Ms. Wright grew up in Carrollton. As a child, she listened to her mother sing and play piano at Greater St. Stephen Baptist Church on South Liberty Street. Her mother had attended McDonogh 24 Elementary School with future gospel legend Mahalia Jackson, and they remained friends.

Ms. Wright graduated from Booker T. Washington High School, then left Southern University in Baton Rouge after two years to marry her first husband. While raising her children, she confined her singing to home and church.

As her children grew up, she worked as a secretary at Eleanor McMain Secondary School. Encouraged to pursue singing as a profession, she wrestled with the notion of performing sacred gospel music in secular clubs. She consulted childhood friend and fellow gospel singer Jo “Cool” Davis, who urged her to make the leap.

She nurtured her early career in such Bourbon Street clubs as the Old Absinthe Bar. “I love Bourbon Street,” she said in 2008. “If it wasn’t for Bourbon Street, I wouldn’t be where I’m at now. You meet a lot of people from all over the world.”

In 1990, while singing at Bourbon Street Gospel and Blues, she met “60 Minutes” correspondent Ed Bradley. He became an ardent fan; up until his death, Bradley introduced Ms. Wright for her Jazz Fest performances.

She released her debut album, “Heartbreakin’ Woman,” in 1990 on Tipitina’s Records. A French label issued 1993’s “Born With the Blues.” She covered a U2 song as the title track of 1995’s “I Still Haven’t Found What I’m Looking For.”

Her tenth album, 2001’s “Marva,” was a typically eclectic affair, featuring such guests as Bo Dollis and Terrance Simien. She covered Bob Dylan’s “Serve Somebody” and “Knockin’ On Heaven’s Door.”

In the 1990s, her audience at the Uptown club Muddy Waters occasionally included a daughter of then-Vice President Al Gore. That led to an invitation to perform at the White House.

Hurricane Katrina inundated her home in eastern New Orleans with nearly 8 feet of water. She and her second husband, Antoine “Tony” Plessy, moved to Bel Air, Md., near Plessy’s adult children. Ms. Wright was not impressed with the culinary sensibilities of her home-in-exile.

By the fall of 2006, she had resettled in Harvey. At that year’s Voodoo Music Experience in City Park, she performed a tribute to Mahalia Jackson in the Preservation Hall Tent. An overflow crowd showed up for her Sunday morning set, much to her surprise.

She had lost weight during her year in Maryland, but her clarion voice was undiminished. Backed by a crackerjack band, she sat on a stool, eyes clenched, and dug into gospel standards “This Little Light of Mine,” “Soon I’ll Be Done With the Troubles of This World” and “He’s Got the Whole World In His Hands.” She recast the Gloria Gaynor disco anthem “I Will Survive” as a dramatic statement of resolve.

From January 2007 through March 2008, Ms. Wright sang most weekends in the Ritz-Carlton’s On Trois Lounge. After leaving the Ritz �” she apparently sang too loudly for the lounge �” she returned to Bourbon Street with her band, the BMWs, an acronym for “Band of Marva Wright.”

In August 2008, Ms. Wright was among the Louisiana artists who performed at the delegates welcoming party of the Democratic National Convention in Denver. At the Colorado Convention Center, Ms. Wright sang “A Change Is Gonna Come,” accompanied by guitarist Tab Benoit.

In 2009, Ms. Wright suffered two strokes. She was first hospitalized in mid-May, then recovered sufficiently to resume performing. However, a far more traumatic stroke returned her to the hospital on June 6. In the difficult weeks and months that followed, she underwent dialysis treatments and struggled through rehabilitation. She never regained enough strength to perform. 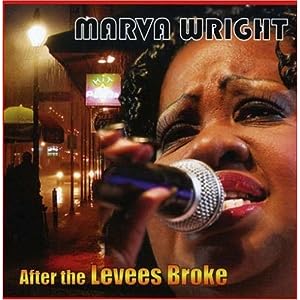 After The Levees Broke

All About Jazz musician pages are maintained by musicians, publicists and trusted members like you. Interested? Tell us why you would like to improve the Marva Wright musician page.