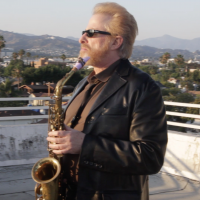 "Saxophonist Justin Chart takes improvisation a step further with The Scarlet Jazz Room. This album relies entirely on improvisation, and the result is quite impressive. Chart's alto sax playing is as cool as it gets!"

Captivating. Intriguing. Evocative. Just a few of the words that describe the experience of listening to Justin Chart's jazz albums. Chart gracefully and without inhibition bares his soul in his music, inviting us to join him in experiencing a depth of emotions. Sometimes the journey is slow and sultry, other times it's jaunty and irrepressible. What intrigues me is that each track is 100% improvised in the moment. Improvisation is obviously at the heart of jazz, yet jazz musicians typically start with a melody which they already know. Chart takes improv to a new level. He selects a key and a tempo. Then it's instant creation by Chart and his band. What's even more amazing is that the synergy between Chart and his band makes the transitions between soloists seamless, creating music that sounds like it was coordinated in advance. That's what so intrigues me about his music. What does it take to be able to let yourself be so in the moment that you can compose on the spot while coordinating with such ease with the other members of the band? Obviously, it's much more than technical skill - which Chart and his band all express effortlessly. Justin Chart is an artist of intense vision. His Saxophone playing is virtuosic, cross-cultural, and passionate. His distinctive sound using wide intervals, abrupt changes of mood and tempo. Kudos to Chart and his band for their willingness to be completely in the moment, allowing their energies to combine with the energies of their listeners, to create music which taps into and expresses those energies to create such a sublime listening experience. It is not easy to create music that effectively unites the powerful charge of unbridled energy with the tender emotions of the heart and soul, but Justin Chart is a unique artist with a rare talent for making magical music. A native of Los Angeles, Justin is in love with his native city… and has proven it with, to date, six versions of Los Angeles the Song. It’s an upbeat love song to his city… one that resonates with many who view his videos on all platforms of social media… with well over 11 Million viewers on You Tube Justin Chart has written the Anthem for Los Angeles.

Awards and Recognition Chart has received the following awards and recognition: Certificate of Recognition of Service to the City of Los Angeles in June of 2014 from Council President Herb Wesson Jr. Proclamation and Angel Award from the City of Los Angeles in June of 2014 from Councilman Tom La Bonge Artisan Appreciate Award in July of 2014 from Los Angeles Mayor Eric Garcetti Proclamation of Service to The Latin Community of Los Angeles in February of 2015 from Councilman Jose Huizar Award of Commitment and Inspiration to the City of Los Angeles in March of 2015 from First Council Member Gil Cedillo Statement of Accomplishment in February of 2016 from United States Senator Dianne Feinstein In May of 2017, the Los Angeles city council adopted Chart's composition of "Los Angeles The Song" as an official part of Los Angeles' history. Humanitarian and Charitable Causes Chart is involved in numerous charitable causes. He has performed numerous fund-raisers to raise consciousness about the loss of funding for the arts in public schools. Chart in a partnership with Cal Fund raised over $50,000 for the California wildfires. Chart has served as Musical Ambassador for Wildlife Warriors Worldwide and the Australia Zoo Foundation.

Justin Chart is an award winning singer-songwriter and an accomplished jazz saxophonist. On his spontaneously created pieces Chart often collaborates with a rotating cast of like-minded sidemen. The resulting music is as sophisticated and intricately structured as carefully notated compositions. Chart, once again, showcases his unique artistic approach with the cinematic and enchanting The Scarlet Jazz Room. Los Angeles-based, award-winning, musician Justin Chart is both an accomplished singer-songwriter and a superlative saxophonist. Chart infuses his jazz work with a distinct melodicism and his pop songs with a crackling spontaneity

Justin Chart is an award winning singer-songwriter and an accomplished jazz saxophonist. On his spontaneously created pieces Chart often collaborates with a rotating cast of like-minded sidemen. The resulting music is as sophisticated and intricately structured as carefully notated compositions. Chart, once again, showcases his unique artistic approach with the cinematic and enchanting The Scarlet Jazz Room. Los Angeles-based, award-winning, musician Justin Chart is both an accomplished singer-songwriter and a superlative saxophonist. Chart infuses his jazz work with a distinct melodicism and his pop songs with a crackling spontaneity. A number of his releases are recorded in one take and are mostly improvised while eschewing dissonance and embracing lyricism. His tenth, Live in Los Angeles, is no different. Accompanying him through this exciting set of 12 originals are a rotating cast of sidemen all of whom share Chart's artistic vision. 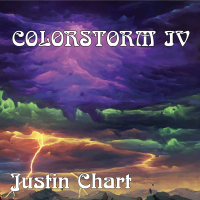 From: COLORSTORM IV
By Justin Chart

All About Jazz musician pages are maintained by musicians, publicists and trusted members like you. Interested? Tell us why you would like to improve the Justin Chart musician page.