In an art form awash with ingenues and shiny singers newly minted from music school, Ellen Robinson’s emergence is a breath of fresh air. With her new album Don’t Wait Too Long, the Oakland jazz vocalist makes a convincing case for the value of life experience as a template for reimagining American Songbook standards and more contemporary fare. Displaying impressive skills as a songwriter, she also infuses hard-won wisdom in original tunes. Like her two previous releases, Don’t Wait Too Long was produced by the sure hand of drummer and veteran DJ Bud Spangler. It’s the work of a late-blooming artist with a clear, heartfelt vision, exquisite taste, and lovely voice that lingers in your ear long after the music has finished.

Recorded live at Freight & Salvage in Berkeley CA, the album captures the vivacious singer with her highly sympathetic band featuring the articulate bassist Sam Bevan, versatile drummer Dan Foltz, the unabashedly lyrical saxophonist Kristen Strom, and pianist Murray Low, one of the region’s most sought after accompanists. Focusing on ballads with sinuous melodies, Robinson sustains a dreamy mood with a deceptively unadorned style, eschewing vocal acrobatics and scat solos in favor of close attention to melodies and emotionally insightful phrasing. Exploring a program laden with unexpected treasures, she distills the essence of each song. “I have to feel connected to the lyrics,” says Robinson. “I’m not a gymnastic singer in terms of scatting. I do like taking a straight ahead jazz tune or a pop tune and making it my own.”

The album opens with “Dance Only With Me,” a rarely sung gem by Jule Styne, Betty Comden and Adolph Greene from the 1958 Broadway comedy “Say, Darling” about the making of a Broadway musical. She turns the song into a wistful reverie, far more a whispered prayer than an imperious demand. Even when Robinson interprets familiar material, like Lerner and Loew’s standard “Almost Like Being in Love,” or Johnny Burke and Jimmy Van Heusen’s “But Beautiful,” she unveils new shades of meaning in the lyrics, letting the tunes unfold at deliciously languorous tempos.

When Robinson takes liberties with a song, like her slyly re-harmonized version of Irving Berlin’s “Be Careful It’s My Heart,” she doesn’t so much reinvent it as highlight the tune’s playfully imploring lyric. She transforms songs of more recent vintage too, like her jazz appropriation of the mid-60s pop hit “Our Day Will Come” which she delivers with righteous conviction.

Listening to the album without looking at the credits, one might be very surprised to discover that Robinson contributes three original songs, so seamlessly do they fit in with the standards. “Soon” sounds like it was lifted directly from the first act of a classic Broadway musical, as the tension builds between a couple fated to take the plunge into romance. “It’s such a thrill to write a song and bring it to the band,” Robinson says. “I’m very collaborative. We try different things. I’m really proud of the fact that I write my own charts, and that I can put my name on some of these songs.”

Born in New Rochelle, New York and raised in Stamford, Conn., Robinson grew up in a sylvan setting and spent much of her adolescence climbing trees and enjoying nature. But after hanging out with a highly musical family that lived nearby she was inspired to explore the piano at home, and learned the basics from her mother. By high school she was playing guitar, writing and performing her own songs whenever she got the chance. Realizing that music was her calling, but with little family support for a career as a performer, she earned a music education degree from Manhattanville College with a major in piano. “I wanted to be a composer, but my parents said I would never be able to support myself, so I got into music education,” Robinson says. “When I got out of college I taught music to children. I continued writing my own music, which kept me sane and alive.”

In 1976 Robinson moved to the Bay Area with her partner at the time, and found work teaching music at private schools in the East Bay. Still intent on developing her craft as a singer/songwriter, she had started singing solo without accompanying herself after a mishap with her guitar. Working various jobs, including floor waxing, to pay the bills, she was given free rein by a client to explore his record collection. “I grabbed an album by Carmen McRae, and it totally amazed me,” she recalls. “I didn’t know people sang like that.”

Hanging out at the San Francisco jazz spot Storyville she met bassist Scott Steed, and he offered to play for her students at Oakland’s Beacon Day School. He brought pianist Art Khu and drummer Bud Spangler to the morning presentation, and she ended up sitting in with the trio on “Give Me the Simple Life.” The encounter launched an ongoing creative partnership between Robinson and Spangler, a Grammy Award-nominated producer whose credits include sessions by Cedar Walton, Mark Levine, Taylor Eigsti, Anton Schwartz, Mimi Fox, and vocalists Kitty Margolis, Clairdee, Ed Reed, and Nicolas Bearde. “Bud said, ‘Hey, you’re good, I can help you,’” Robinson says. “Bud was the angel in my life. He’s produced all three CDs. He’s been my mentor and a dear friend.”

She continued her education, studying at the Stanford Jazz Workshop and JazzCamp West. By the time she released her debut album, 2001’s On My Way To You, she had emerged as a stand-out on the Bay Area’s burgeoning jazz vocal scene. The album garnered enthusiastic praise from critics and veteran masters like Carol Sloane, who wrote, “Hers is a white chocolate sound, intense and pure, swinging and bitter-sweet. Keep your ears and eyes open for more Ellen Robinson."

She followed up with 2006’s Mercy! an album gleaned from performances in Berkeley and San Francisco between 2001-2005. The album documents her with her first band, and with a later incarnation featuring bassist John Wiitala, drummers Jeff Marrs and John Arkin, and soul-drenched saxophonist Charles McNeal. The album also received rapturous reviews, like the website AllAboutJazz’s rave, “This singer delivers from the heart. That’s her forte...Robinson interprets lyrics in such a way that we feel them completely.”

A gifted educator who teaches at the Jazzschool in Berkeley and Community Music Center in San Francisco, Robinson directs several vocal programs and ensembles, including a musical theater workshop at Stagebridge and the Anything Goes Chorus, a community chorus that has given public performances and free concerts at retirement homes, homeless shelters, prisons and half-way houses since the early 1980s.

She doesn’t see much separation between her work in the classroom or on stage. With Don’t Wait Too Long she offers an object lesson in music’s transformative power, a power that she both embodies and transmits. “As a teacher I feel like I’m a performer, and as a performer I feel like a teacher,” Robinson says. “I want people to be entertained and I want them to feel different after they've heard my music.”

"Hers is a white chocolate sound, intense and pure, swinging and bitter-sweet. Mercy! Ellen Robinson Live showcases the West Coast singer in a beautifully balanced program of standards and fresh material." Carol Sloane

"Ellen Robinson knows how to connect with an audience. Each song has a story to tell and she does so with clarity and warmth." All About Jazz 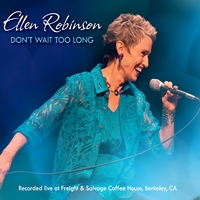 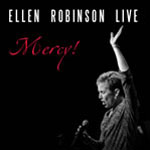 All About Jazz musician pages are maintained by musicians, publicists and trusted members like you. Interested? Tell us why you would like to improve the Ellen Robinson musician page.