Some musicians take the road less traveled on their creative journey, and vocalist Teraesa Vinson has a unique perspective on following one’s bliss. The St. Louis native actually completed a B.A. in Psychology at Spelman College and a Ph.D. in Counseling Psychology at the University of Florida before deciding to pursue her musical aspirations. After a time teaching other students to follow their dreams, she decided maybe it was time she heeded her own advice. Since landing in New York in 2003, Vinson has embraced every opportunity to improve her craft.

After a relatively short stint in the city, Vinson got the chance to record for the first time in 2004. That debut, Opportunity Please Knock, was an occasion to record with some outstanding musicians: Ron Blake, Tom Dempsey, Carlton Holmes, Nicki Parrott, and Dion Parson. The combination of well-loved standards, less recorded gems (Moon Ray) and a pop favorite (I Can’t Make You Love Me) attracted both traditional jazz enthusiasts and a more mainstream audience. Moreover, the album was critically well-received and earned airplay on radio stations across the globe.

Yet another great opportunity came Vinson’s way in 2005. That January, Vinson became the resident vocalist at Langans in Times Square. Singing alongside the phenomenal young drummer Quincy Davis and his trio, Vinson continues to perform at Langans weekly in addition to other venues around the city.

2007 promises to be an exciting year, as Vinson plans to record her follow-up project in Spring. Aiming for a more intimate feel, the recording will be a duet album with good friend and stellar guitarist Tom Dempsey. The two have collaborated since Vinson’s first performances, and Dempsey was also featured on her debut recording. The easy chemistry between the two, which frequently enchants their audiences, should lead itself to a notable sophomoric effort.

Read more articles
"Teraesa Vinson and partner Tom Dempsey succeed in capturing the emotions and passion that the composers of these songs intended to convey, with only a single guitar and the charming voice of an angel." --eJazzNews 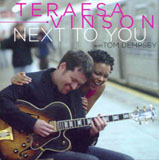 All About Jazz musician pages are maintained by musicians, publicists and trusted members like you. Interested? Tell us why you would like to improve the Teraesa Vinson musician page.