Born on March 22, 1952 in Boston, Massachusetts, Bob Mover started playing the saxophone at age 13. Two years later, Phil Woods heard him in a high school All Star band in Miami, Florida and gave Bob a scholarship to study under him that summer in New Hope, Pennsylvania at Ramblerny Camp for the Performing Arts.

Before the age of twenty--guest soloist with the University of Miami Jazz Ensemble (under the direction of Jerry Coker) At the age of 17 performed at the Village Gate in N.Y.C. and in concert at Harvard University with Jaki Byard.

At the age of 21, Mover joined Charles Mingus for a stay of five months at the Five Spot in New York City. He then joined Chet Baker's group for 9 months before leaving for Brazil in 1974. During his six months stay, he worked with samba legends Johnny Alf (the “father of Bossa Nova”) and Lucio Alves.

Upon his return to New York City in 1975, he rejoined Baker. They worked regularly in New York City clubs, as well as performing at Carnegie Hall, Avery Fisher Hall and touring the mid-west and California. In the summer of that year, he made his first European appearances with Chet Baker at La Grande Parade du Jazz (Nice, France), Jazz Festival Laren (Holland) and the Middleheim Jazz Festival (Antwerp, Belgium), where they played opposite Sarah Vaughan. This concert was filmed for European television and a review appeared in the Belgian press, which described Mover as “a 23 year old revelation”.

At the end of 1975, Bob went out on his own, leading his own groups around NYC and elsewhere. His first working band featured Tom Harrell (trumpet) and the late Jimmy Garrison (bass). Critic, Chuck Berg, wrote in Downbeat “Mover is a poet/philosopher whose music rings with a profundity that speaks to both heart and mind... Mover's voice is his own, worth listening to... carefully.” From 1976 to the end of 1979, he led his own quartets and quintets every Sunday and Monday night playing to packed houses at Sweet Basil in Greenwich Village.

In 1976 and 1977, he made is first two recordings under his own name--On The Move (Choice) and Bob Mover (Vanguard)--the latter, having received a 4.5 star review in Downbeat Magazine. He worked as a sideman with Duke Jordon, Matthew Gee, Albert Dailey, Vinnie Burke and others and often subbed for Russell Procope in a trio with pianist Brooks Kerr and Duke Ellington' long time drummer, Sonny Greer. During this period, Bob also co- led a group with Lee Kontiz. They played in concerts and clubs in the USA and Canada and recorded an album under Konitz's name, Affinity --The Lee Konitz Quintet (Chiaroscuro) (that also received a 4.tstars in Downbeat).

In 1981, Bob resided in Boston where he taught improvisation workshops at Berklee College of Music in Boston while holding down regular gigs at Michael's Pub and Pooh's Pub with his quartet (Joe Cohn or Mick Goodrich on guitar, the late Charlie LaChapelle on bass and the legendary Boston drummer Bobby Ward). He also played in the quintet of pianist Art Matthews with young trumpeter, Wallace Roney as his front line partner.

Returning to New York City in the summer of 1981 Bob continued to work with Baker as well as on his own. Mover recorded In the True Tradition for Don Schlittens' Xanadu label, which received 5 stars in “The All Music Guide To Recorded Jazz”. His solo on his original “Blues for Bobby Ward” appears in the book “15 Alto Solos”, published by Jamey Aebersold along with solos by Charlie Parker, Cannonball Adderley and others. In 1982 he had the privilege of playing with one of the fathers of modern jazz, drummer Kenny Clarke, touring Europe in a group led by Swiss vocalist Miriam Klein that also featured Sir Roland Hanna on piano.

Back in New York City in 1982, he recorded once again, for Xanadu, Things Unseen, which also received 5 stars in “The All Music Guide To Recorded Jazz”.

From 1983 to 1986, Mover resided in Montreal, where he taught at Concordia University and recorded his 5th album as a leader--The Nightbathers (Justin' Time)--'free' improvisations with Paul Bley and John Abercrombie.

Moving to Toronto in 1987, Mover became an important figure in establishing homes for jazz at the Rex Hotel, The Pilot Tavern and Quigley's. In 1988, he began a touring partnership based in NYC with Walter Davis Jr., a protege of Bud Powell and Thelonious Monk and veteran of groups led by Charlie Parker, Art Blakey, Max Roach, Sonny Rollins, Jackie McLean and others. They toured together, playing concerts and festivals in France, Italy, Switzerland, Belgium, Nederlands, US and Canada until Davis's unfortunate death in 1990. During this period, Davis featured Mover on four tracks of his CD, Illumination, which was recorded for the label Pony Canyon/Jazz City Series in 1988, with Ron Carter and Kenny Washington. Mover also recorded his own CD, You Go To My Head, for the same label in December of that year featuring Rufus Reid, Benny Green, Victor Lewis and Steve Hall.

1989 brought Bob to Osaka, Japan, to perform at Expo 1989. That year he toured he toured France with Walter Bishop playing the Charlie Parker with Strings material and participated in the “Alto Summit” homage to Charlie Parker concert at La Villette in Paris along with Jackie McLean, Phil Woods, Clarence “C” Sharpe, Vincent Herring and Frank Morgan (with a rhythm section consisting of Walter Davis Jr., Percy Heath, and Roy Haynes). That same year in Toronto, he and pianist Bob Fenton presented a concert/lecture music and dinner series on the music and lives of Charlie Parker, Thelonious Monk and Sonny Rollins at the McMichael Gallery of Art, in Kleinberg, Ontario.

In 1992, Bob played French Jazz Festivals in quartet, and with a chamber orchestra playing the Charlie Parker With Strings repertoire with Walter Bishop on piano (who had been Bird's pianist on the original tour 'With Strings') where Bob improvised the Parker role. Bob and Walter Bishop also traveled to The Super Jazz Festival in Tel Aviv, Israel that year to play a quartet tribute to “Bird” that also featured the great bassist, Ray Brown.

From 1987 to 1997, Mover lived in Toronto, where he created a course at York University, Musicianship for Jazz Singers. He continued his touring schedule making seasonal trips to Europe often in the company of one of his early mentors from Miami Tony Castellano. Castellano, who died in 1999, was an extremely original pianist, who had played many years with Ira Sullivan as well as accompanying visiting artists such as Dizzy Gillespie and Sonny Stitt in Florida. He and Mover recorded a still “yet to be issued” duet CD in 1998 (in NYC).

After recording a live CD “Television” from a 1997 Concert im Montreal which featured pianist John Hicks, Bob returned to NYC. There he taught at New Jersey City University, and gave regular weekly improvisation classes at “One Soul Studios” in Manhattan, while playing around the tri-state area, and recording with vocalist, Jane Blackstone on her CD “Natural Habitat, NYC” (in Motief Records).

After a west coast tour (Los Angeles, San Francisco, San Diego, Portland), in August of 2001, Bob resided briefly in Portland Oregon than returned to Toronto until February 2004 when he returned to Manhattan where he now resides.

In 2012, Bob has been performing with Esperanza Spalding and the Radio Music Society, and will be touring Europe with the band in July, including the North Sea Jazz Festival and many other major festivals and venues. Show less

Bob Mover Claims Spotlight with "It Amazes Me"

”People are always amazed when they hear him play!” --Chet Baker

”Bobby and I go back a long way. Bob is a wonderful musician- one of the great alto players who in recent years has become a real tenor player as well.” --Michael Brecker

”Like Charlie Parker, Bob Mover knows how to make musical escapes and come out all sexy and beautiful.” --Mitch Borden Owner of Fat Cat Jazz and former owner of the now ”legendary” Smalls in Greenwich Village, N.Y.C.

Bob Mover has been teaching saxophone, Improvisation, and coaching vocalists for over 30 years worldwide. He is considered one of the most accomplished and respected teachers in the jazz world.

Bob's approach to learning Improvisation will lead the student to significant improvement, even with limited practice time.

Bob Mover has been teaching saxophone, Improvisation, and coaching vocalists for over 30 years worldwide. He is considered one of the most accomplished and respected teachers in the jazz world.

Bob's approach to learning Improvisation will lead the student to significant improvement, even with limited practice time.

Bob Mover has given many Masterclasses in US, Canada, Europe, Brazil and Israel at many distinguished conservatories and universities.

Prices: Prices vary according to budget and venue.

My Heart Tells Me 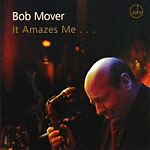 All About Jazz musician pages are maintained by musicians, publicists and trusted members like you. Interested? Tell us why you would like to improve the Flip Phillips musician page.