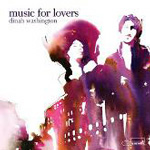 Dinah Washington's biting, blues-smoked phrasing is often cited as the primordial ground from which singers such as Esther Phillips and Nancy Wilson blossomed, and through them, more contemporary vocalists like Chaka Khan and Patti Labelle subsequently bloomed. This new collection of ballads draws from Washington's 1962-63 recording prime, a fertile period when she released several albums of ballads and blues, arranged and conducted by longtime Frank Sinatra favorite Don Costa, for Roulette and Mercury Records.

Like every female blues/jazz vocalist of the past century, Washington operates in a world first illuminated by the legendary Billie Holiday. Holiday's classic composition "Lover Man opens this set in dark shadow; the instrumentation lays out a typical "ballad with strings homogenized session, but Washington's vocal phrasing burns more acidic, almost bitter. Washington also mulls over a "Blue Gardenia (Holiday's trademark flower) accompanied by an ensemble that sounds smaller and bluer.

"Romance in the Dark presents Washington at her wanton best; she writhes under the cover of Billy Butler's legendary soul-jazz guitar, relaxing to bounce with the insouciant lilt of the blues then grinding her hips down to turn out the final verse in a voice that's most authoritatively bad-ass and beautiful, her own flower growing from the root of Bessie Smith. Her interpretation makes it clear: she ain't talking about romance—she's talking about ballin' in the dark. But for the most of the rest of album, Sings for Lovers presents the Dinah Washington so focused on refinement that she distills the blues completely out of her repertoire.

Lover Man; For All We Know; Romance in the Dark; I Didn't Know About You; You're a Sweetheart; Blue Gardenia; I'm Gonna Laugh You Out of My Life; The Good Life; That Old Feeling; If It's the Last Thing I Do; He's My Guy; I'll Never Stop Loving You.