BY GLENN ASTARITA
January 29, 2014
Sign in to view read count 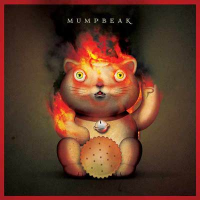 When considering most instances of progressive rock, Mumpbeak is a horse of a different color. With four world- class bassists, chiefly performing on alternating tracks, and keyboardist Roy Powell's unearthly sound-shaping mechanisms garnered from an electronically souped-up Hohner clavinet, the band brashly merges a doomsday panorama with insurrectionary tactics.

King Crimson drummer Pat Mastelotto's punchy and springy grooves underscore the various mind-bending processes, featuring his fellow Crimson band-mate Tony Levin appearing on one track. With a blindfold test scenario, I would surmise that Powell is playing an electric guitar or that I'm listening to a new Jeff Beck album, for example. However, there are moments when the overall clavinet sound is a tad thin, although the deep bass lines on a per-track basis more than compensate.

"Forelock" conjures notions of Crimson's Larks Tongue In Aspic era amid punishing breakouts and Powell's distortion- heavy permutations, twirling notes, and ostinato phrasings. And on certain passages he injects ethereal layers and fuzz-toned treatments. While "Nork" is a piece that attains searching qualities in a sea of phased sounds and the drummer's rumbling patterns. Here, Powell dishes out a psyched-out solo atop bassists Bill Laswell and Lorenzo Feliciati's elongated notes, for a composition that also bridges surrealism with Eastern modalities. Other tracks are designed with guileful and evasive dialogues, sprinkled with free-form improvisations.

The closer "Piehole," is an upbeat space jam where Mastelotto pushes, prods and takes a solo that re-energizes the piece into alternating cadences and a topsy-turvy schematic. Pleasantly insane and markedly outside the box, the musicians ignite dry tinder in a sprawling forest of progressive rock-isms.