BY DAN BILAWSKY
November 13, 2012
Sign in to view read count 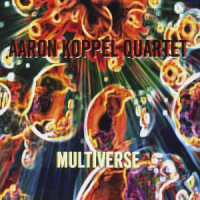 The city of Chicago has always been a breeding ground for musicians looking to expand the horizons of their own art and the styles that they represent, so it should come as no shock that guitarist Aaron Koppel was born and raised in this Midwestern musical mecca. Koppel, who made his initial entrée into the world of leader-on-record with The Wild Call Of The Multi-Tasker (Self Produced, 2007), and followed that up with Falling Together Falling Apart (Chicago Sessions, 2009), touches on a myriad of styles for his broadminded followup for the Chicago Sessions label.

Koppel harnesses the energy and attributes of rock, blues, funk, jam band joie de vivre and jazz in its many forms, and filters it all back out through his eyes on Multiverse. He's but one of many with a panoramic eye on the jazz world, but he's one of few that can alter his overarching instrumental sound esthetic to suit these different stylistic endeavors. He does the clean-toned, '50s and '60s guitar sound ("Modal Realism"), the Kurt Rosenwinkel/Mike Moreno/Adam Rogers post-modern thing ("The Ruse" and "Earlids") and the Allman Brothers Band-meets-Santana rock-blues trip ("The Monk Factory" and "When I Got Home I Lost It") with equal skill. Koppel wears a sonic coat of many colors and he dons it proudly.

While Koppel is rightfully seen as the star of his own show, his band deserves a lot of credit for giving the music a boost by injecting its own individual personalities into the mix. Pianist Matt Nelson proves to be the MVP of the bunch, providing whatever is needed on piano, Hammond B3 organ or Rhodes electric piano. His piano work on the dark and absorbing "Earlids" proves to be a high point on the album, and he meshes well with the rest of the band on the Meters-like slice of greasy funk, "Crispy Bacon." Bassist Graham Czach proves to be a wonderful musical go-between, capable of shifting in synch with melodic moving parts or lurking down below with drummer Robert Tucker, who uses shift-on-a-dime tactics to help the whole band make some sharp turns with ease.

Multiverse delivers the musical mélange promised by the album title, but it even goes a step further than that; it delivers it with style, verve, tact and an eye on jazz as an expansive, all-inclusive force of nature.