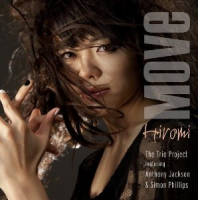 Keyboardist Hiromi once again reaps the benefits of her superstar rhythmic section, drummer Simon Phillips (The Who, Toto, David Gilmour) and contrabassist Anthony Jackson (Paul Simon, Chick Corea, Steely Dan). A largely acoustic set, she yields an action-packed schema, teeming with intricately designed arrangements while zooming in for the kill on many occasions. However, Hiromi's breadth of scope is rather monolithic, since her arrangements are of the whirlwind variety, where nuance, tonal shadings and ballad-like intricacies complement and contrast her perpetual motion.

The final and lengthiest piece on the album "11:49 PM" is a compact and manifold tour de force. Opening with a delicate semi-classical etude, she kicks the band into 10th gear via power-packed rock grooves, augmented by Phillips' effectively mic'd drum-kit, equating to a huge presence atop Jackson's punctual and coiling lines. Hiromi varies the current and toggles the pitch from sensitive balladry to frenzied single note runs and fluid block chords, as the trio soars with a vengeance. And Phillips stretches with polyrhythmic tom patterns, supported by Hiromi's succinct comping. Indeed, the musicians continually evolve the underlying themes and intense frameworks, as the pianist injects an R&B climate into the final moments and concludes the festivities with the gently engineered opening motif. Simply stated, Move is an enterprising venture and remains consistent with the leader's thrills-a-minute type credo, but where others fail, Hiromi's creative spark, laudable technical acumen and adventurous spirit translate into a prominently portrayed sense of fulfillment.