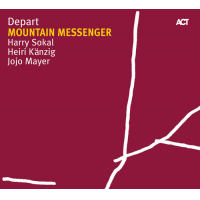 The histories of the players who make up the powerhouse trio Depart are distinguished, but give only a small clue to the nature of the music they offer on Mountain Messenger or its predecessor, Reloaded (ACT Music, 2006), the group's debut.

Austrian saxophonist Harry Sokal and the Swiss rhythm team of bassist Heiri Kanzig and drummer Jojo Mayer have all, together and separately, been members of Mattias Ruegg's Vienna Art Orchestra. Sokal has also played with pianist Carla Bley and trumpeter Wynton Marsalis, Kanzig with trumpeter Art Farmer and France's Orchestre National de Jazz, and Mayer with pianist Monty Alexander and his own band Prohibited Beatz.

The clue is Mayer's Prohibited Beatz. On Mountain Messenger, as on Reloaded before it, Depart play a raucous, hard rocking and even harder swinging, open-ended collision of blues, R&B, hard bop and free improv, propelled by Kanzig's murderous ostinatos and Mayer's explosive post-rock beats (and leavened by the occasional ballad and re-arranged Swiss yodel song).

You'd call it groove music if it wasn't for the giddy rhythmic invention which Kanzig and Mayer bring to the occasion, and for the mainly acoustic nature of the line-up—and above all for the presence of Sokal, who performs in a manner which owes something to King Curtis and the old-time honking and screaming tenor men, but a lot more to the sound and improvising style of Sonny Rollins.

Playing mainly tenor—sometimes embellished by multi-tracking, a harmonizer or guitar-like tone distortion, and staying on-mike for most of the session—Sokal thrills as much for the consistent inventiveness of his improvising, which like Rollins' is playful, theme-led and motivic, as for its ferocity, funk and primal, testifying impact.

Most of the tunes were written by Kanzig, who also re-arranged the two traditional Swiss folk tunes. Sokal co-wrote another two, Mayer wrote one. The covers are Holland/Dozier/Holland's "I'm A Road Runner," played by Sokal like Junior Walker on a headful of speed, and Cahn/Brodsky's pretty "Be My Love" (which at less than two minutes is essentially a divertissement between the hard driving "Better Report" and "Slice Of Bread," the latter a calypso on which Sokal stirs particularly strong comparisons with Rollins).

It's refreshingly hard to categorize the music on Mountain Messenger. But it's undeniably affective and exciting stuff, and practically guaranteed to raise both a smile and your feet.