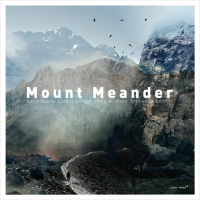 While it might seem that there is a production line for outfits hailing from Scandinavia, Mount Meander demonstrates that the output is far from standardised. Comprising two Germans in pianist Lucas Leidinger and drummer Thomas Sauerborn, along with the Copenhagen-based pair of Latvian saxophonist Karlis Auzins and Polish bassist Tomo Jacobson, the collective quartet shares a common language in spite of their diverse origins. Although all relatively young, their credits already encompass John Tchicai, Lotte Anker, Mat Maneri and Frank Gratkowski. That gives an idea of their reach during a spontaneously birthed program of nine pieces which nonetheless fits well within the modern mainstream.

All show themselves to be proficient improvisers. Saxophonist Auzins displays a folky lyricism, often hewing close to tonal centers, although that's leavened by his muffled tones and sudden yodelling blurts on the choppy "Motoric Animal." On piano Leidinger uses preparations to emphasise the percussive nature of the instrument, particularly evident on "Politeness Is God." Elsewhere his probing lines blur the distinction between comping and counterpoint. Drummer Sauerborn proves adept at minimalist tappy dialogue and blends well with the spare but inventive Jacobson on bass, notably on their propulsive introduction to the spiky "Swung."

"Sunsail," which constitutes the first three tracks, forms a continuous performance which goes beyond the Coltrane echoes of the title to also touch on Ornette Coleman (Auzins sounds as if he is paraphrasing "Lonely Woman" during "part 1") and Keith Jarrett (occasioned by a stomping piano vamp on "part 3"). Unhurried conversational interchange dominates the determinedly egalitarian session, nowhere more so than during the introverted pastoral "A Bird In The Hand...." They range widely, ending the album with the doomy drones of "Bow," and while such breadth means there is no danger of becoming typecast, hopefully there will be some more in depth explorations too in the future.