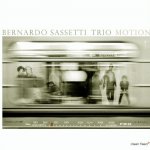 He is back again in a trio setting with bassist Carlos Barretto and drummer Alexandre Frazão. The three recorded Sassetti's critically acclaimed Nocturno (Clean Feed, 2001) and Ascent (Clean Feed, 2005). But Sassetti can also be heard in accordionist Wil Holshouser's Palace Ghosts and Drunken Hymns (Clean Feed, 2010).

With great interest in delicacy, and a passion for minimalism, the trio avoids grand gestures , playing with litotes and swinging by exaggerating the non-swinging aspects of each tune. Perhaps that is the pure authenticity of this trio's expression.

Due to the inclusion of pieces from film and theater, changes in atmosphere shift the varying concepts. The trio plays with spinning a radio dial on several tracks, improvising off the airways a blues on "MW 108.7 Revival" and a sampled auction on the "Motion II" suite. There is a visual component to Sassetti's music that makes for an enlightened listening experience.