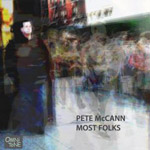 Guitarist Pete McCann's third album, Most Folks, continues his his varied approach to the instrument. After two exciting albums for Palmetto Records, McCann has moved over to the Brooklyn-based OmniTone label, known for cutting-edge jazz. On his previous albums, McCann showed his influences in Bill Frisell and John Scofield and played in number of formats, including straight-ahead, post bop, avant-garde, Latin and fusion.

Pete McCann studied at the University of North Texas, where he received his undergraduate music degree and studied under guitarist Jack Petersen. In 1988, he attended the Banff Summer Jazz Workshop in Alberta, Canada with Dave Holland, Kenny Wheeler, Muhal Richard Abrams and others. McCann now teaches guitar at the New School and City College in New York City Area, where he has been living for some time. He maintains a very active schedule. He's performed on fifty-plus albums in additon to his own, and has appeared with the Maria Schneider Orchestra, Kenny Wheeler, Dave Liebman, Peter Erskine and Tom Varner, among others.

Most Folks is a quintet recording featuring saxophonist John O'Gallagher, pianist Mike Holober, bassist John Hebert and drummer Mark Ferber. As noted above, McCann prefers to explore the various influences that have inspired him within a jazz context. While the album begins pleasantly with McCann using unhurried and well-rounded notes (in the style of a Pat Metheny) on the first two tracks, the title tune, "Jojo's Waltz," the spirited "Rack 'Em Up" and "Yes, My Friend" present an edgier John Scofield or Kurt Rosenwinkel style, matched by saxophonist John O'Gallagher.

On "Las Tias," McCann slips into a comfortable Latin feel on acoustic guitar for a pleasant surprise. "JM" is an homage to John McLaughlin, and before you can say "Mahavishnu," Pete McCann and Company are off and running in the world of jazz fusion. Once again, O'Gallagher sets the pace for McCann's playing.

It is not that Pete McCann is trying to do so much on one album. Rather, it is his preference to display the many styles at which he is adept that spoils an otherwise fine recording. Most Folks will be fine for listeners who like the variety of sub-genre styles, but it may alienate those who like to keep their fusion or "downtown" jazz separate.