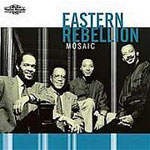 Eastern Rebellion is a jazz super group that has toured and recorded, with various personnel changes, since the mid-1970s. The reissued treasure, Mosaic, features the 1992 version of the band, with charter members Cedar Walton and Billy Higgins on piano and drums respectively, David Williams on bass and Kathy Salem on tenor. These stellar players combine to produce an album that is almost effortless in its excellence.

The interplay throughout Mosaic is a pleasure to hear, whether the band plays a classic ballad like "My Old Flame," dances through a waltz like "Josephine," transforms a show tune like "I've Grown Accustomed to Her Face" or navigates the tricky changes of the title cut. Particularly pleasing is the way that Walton and Moore work off of each other's ideas. The former plays with imagination and wit, skillfully incorporating subtle and not-so-subtle quotations into his carefully laid foundations, like someone leaving graffiti on fresh concrete. Moore's tenor has a round, deep clear tone. He sounds like he's smiling on up-tempo tunes, while on ballads he can make the horn weep. The rock-solid Williams walks with coolness and style and the redoubtable Higgins plays the drums with elegance, using his genius to lay down licks that seem simple on the surface but which eventually lead to a greater rhythmic complexity.

In addition to the fine quartet work, each member adds a brief but effective solo tune: Walton plays the lovely, stride-influenced "I'll Let You Know"; Williams' compelling pizzicato drives "One for Kel"; Higgins lays down slick polyrhythms on "Shoulders"; and Moore wraps his soothing tone around "My One and Only Love." Whether as a group or as soloists, Eastern Rebellion swings on Mosaic with a facility that many bands can only dream of possessing.

Sunflower; John's Blues; I'll Let You Know; Mosaic; One for Kel; My Old Flame; I've Grown Accustomed to Her Face; Shoulders; Josephine; My One and Only Love; Bittersweet.