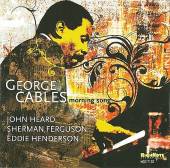 George Cables doesn't get talked about too much anymore. Although he was prominent enough in the 70s to play with Art Blakey, Joe Henderson, and Freddie Hubbard, he has since disappeared somewhat from the mainstream scene. Consequently, HighNote's release of Morning Song, a collection of Cables' 1980 performances from San Francisco's The Keystone Korner, is an important artifact. Although the commercial sound of late 70s jazz can feel dated and contrived, it is a valuable reminder of the way things were.

At the time of recording, Cables' career was on the rise. The preceding year had seen the release of Cables' Vision (Contemporary, 1979), a major record with a strong lineup that included Freddie Hubbard and Bobby Hutcherson. In 1980, Cables was at the height of his popularity.

Morning Song showcases the pianist's gifts, but the track order is often ungainly. Even though the three consecutive solo tracks form a medley of sorts, the producer has made for an odd inertia: the album opens with an accessible Miles Davis-influenced quartet version of "On Green Dolphin Street," then drops back to Cables alone until tracks 5 and 6, and then back to solo for the almost the entire second half.

Generally, the solo numbers on this record have much more creative potential than the quartet efforts. Eddie Henderson's trumpet playing doesn't hold up to Cables' standard, most particularly on Freddie Hubbard's tune, "Up Jumped Spring." Playing over a Hubbard vehicle, Henderson is not without creativity, but in comparison to his forebear the solo hardly seems worthwhile, while the pop influence in his playing dulls his impact.

Playing solo, Cables too occasionally lapses into a predictable, pop-oriented sound. But at other moments his technique and style, while not groundbreaking, deserve real consideration. Rubato solo renditions of ballads often feel like they have been subtly infused with elements of funk or Latin rhythms—as though he is grooving with a full band inside his head.

Cables never goes too far out in his playing, but his technique does allow for an occasional surprise. After straight-up versions of old standards like "Who Can I Turn To?" and "As Time Goes By," Cables sensitively plays a patchwork "Polka Dots and Moonbeams." In just the sixty seconds, he implies McCoy Tyner's minor pentatonic lines, then moves into an almost Keith Jarrett-like sound. By the time he reaches the melody, he has leaned on a few lush Bill Evans chords; then he blusters into a series of fast runs that sound like Oscar Peterson and Cecil Taylor together. The song never goes "out," per se, and the trajectory is always apparent; but the strange, burning moments like these blurry runs are some of the truest on the recording.

On Green Dolphin Street; Who Can I Turn To?; Stroll; I Remember Clifford; Morning Song; Up Jumped Spring; Little B's Poem; As Time Goes By; Quiet Fire; Polka Dots and Moonbeams.