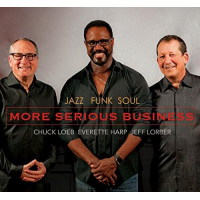 Let's get two things out of the way first. First thing is Jazz Funk Soul is an awful name for a band. It sounds like the way records were categorized in a record store back in the Dark Ages when such things as record stores existed. Second thing is the second Jazz Funk Soul joint, More Serious Business is a marked improvement over their uninspired 2014 debut.

There's nothing happening here which hasn't happened on a thousand smooth jazz albums before, but just because this is familiar doesn't mean it's not good. The principal players, keyboardist Jeff Lorber, saxophonist Everette Harp and guitarist Chuck Loeb are all savvy veterans and expert in coming up with good grooves which sound pretty pumpin' out of the headphones. What's different in their second collaboration is they seemed to approach it with the intention of really coming up with some songs instead of just riffing for four minutes until the producer says "Got it!"

Is there anything unique about a ballad like "The Love?" Not at all, but is sure sounds sweet as Harp solos his brains out as Loeb and Lorber keep things mellow and soulful. On "Fall Departs" Loeb invites Nathan East, his colleague in Loeb's other superband, Fourplay and a very busy fellow himself. East pops and thumbs his bass something fierce while Harp, Lorber and Loeb all take short solos until East himself wraps it up with one of his own.

Harp's "Tuesday Swings" kickstarts things into second gear with a bit more energy as his tenor sax meshes well with Harry Kim's trumpet and Alex Al's swooping basslines to provide a bit more liveliness than normal. If you're not careful you could even find yourself bobbing your head and tapping your toes.

At no time is More Serious Business anything less than top-tier in it's playing, production and professionalism. It's perfect for easy listening after a hard day at work, a slow jaunt around the park or setting the mood for a quiet evening with friends or a significant other. For the jazz aficionado, there needed to be a little more risk-taking spontaneity, but while it's a step up over the drowsy eponymous debut, Jazz Funk Soul has yet to completely come together as a genuine and viable band instead of a marketing plan. The grooves they have down pat. Something fresh and original, not so much.