BY JOHN KELMAN
December 7, 2007
Sign in to view read count 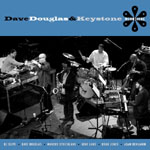 It's unlikely that Dave Douglas expected the Grammy-nominated Keystone (Greenleaf Music, 2005) to turn into an ongoing project, but as a parallel to his quintet of the past half decade, the trumpeter has forged a distinct entity with the group he now calls Keystone. This sextet shares some commonality with the quintet responsible for Meaning and Mystery (Greenleaf, 2006), but there are just as many differences, if not more. Moonshine affirms that Keystone is a band with a very different purpose.

For one thing, Keystone is a far more electric band. Douglas' quintet also features Fender Rhodes as a defining color, but Adam Benjamin's heavily processed Rhodes expands Keystone's textural landscape much further, as do DJ Olive's turntables. And while both bands groove, Keystone's Brad Jones (electric bass) and Gene Lake (drums) take Douglas' sometimes sketch-like, other times detailed compositions into far more fervently propulsive territory. There's nothing in Douglas' quintet repertoire that grooves as hard as Moonshine's funky title track, or approaches the near-metal of the frenetic "Kitten," where Benjamin's overdriven Rhodes sounds more like thrash guitar than electric piano, or the energetic "Tough," which straddles the line between near-prog and a skewed soul-jazz vibe.

Moonshine also bears the earmarks of extensive post-production editing, a process that Douglas first explored with Freak In (RCA, 2003) but with which he's become considerably more comfortable with since. While Douglas' work, no matter what the context—and there have been many in the past fifteen years—is, at the core, about the playing, Moonshine takes his interest in combining group interaction with post-production a step forward. Recorded in front of a live in-studio audience, Moonshine has all the excitement of a live, improvisation-heavy performance and the broader soundscaping that simply can't be created in real time.

Keystone isn't just about high energy, and while its expanded sonics and contemporary ambience are far from conventional jazz, this is music that couldn't exist without that tradition as one stylistic pillar. Douglas and saxophonist Marcus Strickland solo with an advanced language bearing precedence in what's come before; there are even brief moments during the twists and turns of "Married Life" that actually swing, although they come between more ominous grooves and denser electronic textures.

Again inspired by a Fatty Arbuckle film—albeit one distanced from the more outrageous slapstick of the misunderstood and misrepresented comedian's peers—Moonshine is as forward-thinking as its predecessor. But it's equally rooted in the present, with DJ Olive's samples of George W. Bush speaking the word "terrorist" interspersed with a plaintive Middle Eastern chant making this the most overtly politicized music Douglas has made since Witness (RCA, 2001).

What makes Moonshine ultimately such a success, however, is Douglas' ability to cloak avant-garde concerns in accessible surroundings. As deep and challenging as anything he's ever recorded, Moonshine remains an album that's as much food for the heart and soul as it is for the mind, and continues Douglas' remarkably unbroken string of superb and uncompromising releases.