By Troy Collins
December 7, 2007
Sign in to view read count 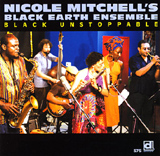 Co-President of the AACM (Association for the Advancement of Creative Musicians) and voted Down Beat Magazine's # 1 Rising Star Flutist for the past two years, Nicole Mitchell is the most significant jazz flutist of her generation.

A former student of flutist James Newton, Mitchell is a peerless improviser, having fully absorbed the extended vocal techniques pioneered by Rahsaan Roland Kirk and the abstruse verticality of Eric Dolphy. Bolstering emotionally direct lyricism with edgy phrasing and expressive vocalisms without abandoning structure or form, she consistently maintains thematic focus, even in uncharted territory.

Reminiscent of the halcyon days of the Loft Era, Mitchell's writing balances inside and outside aesthetics gracefully, vacillating between extremes of freedom and structure with ease. Skillfully weaving circuitous lines of bracing angularity with accessible, buoyant harmonies that recall the glory days of hard bop, Mitchell's tunes both challenge and entertain.

Their fourth album, but first for Delmark, Black Unstoppable follows Vision Quest (2001), Afrika Rising (2002), and Hope, Future and Destiny (2004), all on Dreamtime Records. Available as a studio recorded CD and a live performance DVD, both editions of Black Unstoppable catch the band up close and personal, in brilliant sonic detail.

Singer Ugochi Nwaogwugwu contributes soulful vocals, engaging in a robust blues duet with David Young on "Love Has No Boundaries," and soaring over the infectious Afro-Beat groove of "Life Wants You to Love." With rousing soul power, she leads "Thanking the Universe," spurring the instrumentalists onward and upward.

An enthralling blend of styles and genres unified by an organic sensibility, Black Unstoppable is a definitive statement from the new face of the AACM, and a tribute to the organization's longevity.

Cause and Effect; Black Unstoppable; February; Love Has No Boundaries; Sun Cycles; The Creator Has Other Plans for Me; Life Wants You to Love; Navigator; Thanking the Universe.