By Mark Sullivan
November 14, 2017
Sign in to view read count 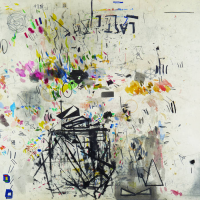 The Belgian duo Linus (Ruben Machtelinckx, guitar and banjo; Thomas Jillings, saxophone and clarinet) began recording with additional musicians on Linus + Skarbo / Leroux (El Negocito Records, 2015), following that with the Linus + Økland/Van Heertum combination on Felt like old folk (Smeraldina Rima, 2015). That grouping worked so well that it returns here, with the addition of percussionist Ingar Zach—making this the largest Linus guest collaboration yet.

The addition of a percussionist might look like the biggest change in the approach. But really it's more about concision, and a shift in the balance between composed and improvised material. Felt like old folk was largely improvised, with only one of the four tracks composed by Machtelinckx. Here the nine tracks are split between three Jillings compositions, two by Machtelinckx, and four group improvisations.

Jillings' "Islander" opens the set with what turns out to be a trio: a very folk-like fiddle tune from Nils Økland, joined by guitar and hand drum. The deep sound of baritone guitar arpeggios dominates "Truth," with some chord stabs overdubbed on banjo, then horns and fiddle added a few minutes in. Zach's percussion is atmospheric: oceanic textural sounds, followed by a surprising chorus of high bells. "Snakes and Ladders" shows another side of Jillings' composing, sounding like a stately, rhythmic dance. Machtelinckx's tunes have their own character. "Dewy" is built on contrapuntal lines, with a melody finally emerging. "Fairbanks" finds him again on banjo, and features another folk-song melody.

For the most part the improvisations are similar to the previous album, although more compact. "Stir" and "Still" both use long tones, building a quiet, slow moving texture. "Stray" goes into new territory, combining a fiddle tune, atmospheric horn accompaniment, and banjo chords with heavy reverb—it sounds more "composed" than some of the written music, and is a fitting close to the album. This is an adventurous, extremely flexible group of players. They're not afraid to mix a bit of electronics in with their acoustic instruments, or to cross stylistic lines. Jazz, folk music, classical music and free improvisation are all fair game. There's also a feeling of welcome to listeners that is rare in experimental music.