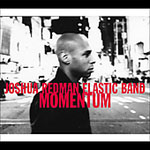 While some may pine for the glory days of the '50s when jazz was more "pure, the reality is that, artistically speaking at least, the present is a great time for jazz. A more cosmopolitan affair than ever before, jazz has seen younger artists grow up with exposure to so many styles of music—inside and outside of the jazz tradition—that there's a steady osmosis allowing for the kind of cross-genre infiltration that makes for all manner of new and exciting music.

Purists may balk, but when you hear an album like Momentum, Joshua Redman's latest with his Elastic Band—which comfortably mixes material by Ornette Coleman, Sheryl Crow, and Led Zeppelin with Redman's own originals and a series of brief jam-like interludes—it's an encouraging indicator that jazz isn't a museum piece. It's a living, breathing form that continues to evolve with each passing year.

Redman and keyboardist Sam Yahel, who makes up the core of the Elastic Band along with alternating drummers Brian Blade and Jeff Ballard, know that it's possible to make funky, groove-centric music that doesn't fall anywhere close to the area of smooth jazz. Probably the most significant precedent for much of the music on Momentum is Herbie Hancock's Headhunters recordings from the '70s. But Redman's perspective is less dense than Hancock's layered keyboard approach, and while the group looks back with fondness, they are equally rooted in the present and perhaps positing for a new kind of accessible music that never panders to a lowest common denominator.

The greater accessibility of recording technology in recent years has resulted in one drawback: young artists sometimes hit the market as leaders before they are perhaps truly ready, and this may have been the case with Redman. While his early albums showed promise, he has only hit his stride in recent years. In fact, to truly appreciate his broad strengths, one need only check out, in addition to Momentum, his recording with the SF Jazz Collective, released simultaneously by Nonesuch Records, and his work on Kurt Rosenwinkel's recent Deep Song. Redman seems to be making giant leaps these days in terms of sound and harmonic depth, justifying the faith that has been afforded him all along.

Additionally, Redman and Yahel utilize technology in a completely organic fashion; Redman often applies real-time processing to his horn, emulation a larger section sound. And while "Greasy G may be the deepest, most visceral funk on the album—due in no small part to bassist Meshell Ndegeocello's guest stint—Yahel's bass synth is equally effective for most of the set.

Ballard and Blade approach the common musical ground of Momentum from two distinct viewpoints. These two players, like Redman and Yahel, can distill their wide experiences into a more focused groove.

The easy rhythms and accessible veneer of Momentum belie a greater depth. One need only listen to the contemporary yet open-ended arrangement of Coleman's "Lonely Woman, beside the folk-like lyricism of Crowe's "Riverwide, to appreciate the true breadth of everyone's reach.

Visit Joshua Redman on the web.