By IAN PATTERSON
December 30, 2018
Sign in to view read count 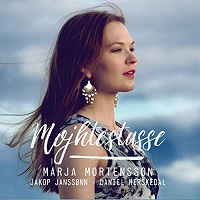 The passing on of musical tradition is fundamental to any culture, but so too is innovation, which breathes new life into old ways. Mojhtestasse, the second album by Norwegian south Saami singer Marja Mortensson, continues her revival of the yoik tradition—a unique, chant-like vocalisation—that has been dormant in her family for several generations. Mortensson's wordless chant-cum-improvisations exert a charm-like spell, but just as fascinating are her self-penned songs, sung in south Saami, which with just five hundred native speakers, is a language in real danger of dying out. Joined by Daniel Herskedal on tuba and percussionist Jakop Janssønn, who weave their own subtle languages throughout, this is a compelling set of traditionally-inspired, contemporary-tinged folk songs.

When not on the road two hundred days a year, twenty-three-year Mortensson helps her family herd reindeer. Her close connection to nature, and to an ancient way of life, provides the inspiration for these delicately spun, wondrous soundscapes. The solo-sung, a cappella "Miesiej vuelie (The Reindeer Calves)"—one of several reimagined traditional songs—is a fleeting vignette, but the minute is plenty enough time to fall for the delicate gravitas of Mortensson's curiously bewitching voice. A trio arrangement of the same tune falls in the middle of the album; Herskedal loops a slow-burning ostinato and then carves a path of plaintive lyricism, while Janssønn's spare percussion provides a steady pulse for Mortensson's sultry narrative. At once child-like and wise, Mortensson's hypnotic voice softly ensnares like slowly curling smoke.

Deep, undulating tuba drones announce "Svakhen vuelie (The Mountains of Svahke)" like an incantation, before Janssønn's sure rhythmic impetus and Mortenson's vocal riffing lift the music into celebratory realm. A change of pace briefly instils a more meditative mood before the trio, steered by Mortensson's mantra-like riff, combines in a rousing finale. Mortensson's ability to shift the music from prayer-like reverie to earthy funk also characterizes "Daniel Mortenson," where the singer's circular path is bookended by bouyant rhythms and a warm-toned solo from Herskedal, who navigates between hymnal balm and tumbling bebop release.

Mortensson bridges past and present with "Johan A. Persson," a traditional song gleaned from an early twentieth century phonograph recording—though it is quite likely much older—where her insistent work song-type chant contrasts with Herskedal's freer rein. All the while Janssønn stirs the pot, his pattering sticks, ritualistic shaker and intermittent metallic chimes coloring the music in much the imaginative way that Jarod Cagwin animates Rabih Abou-Khalil's ensembles. His tinkling chime, as faint as mist, underpins Mortensson's yearning vocal on "Vaajese (A Tale)," while the singer's unaccompanied turns on "Galkije johke (Running Water)" and "Saltien alda muw (My Reindeer Cow)" highlight her ethereal yoiking art.

Shades of Maria Joao color Mortensson's emotive delivery on the gently epic "Mojhtesh (Memories)," while rumbling tuba, cantering percussion and otherworldly panting bring a sense of foreboding to the atmospheric "Aajmeste (From the Snow Storm)." The title track, ("Cultural Heirlooms") a reworking of a traditional yoik, marries gentle kalimba, soothing tuba/bass trumpet drones and Mortensson's lullaby-esque vocal. It's a majestic piece that ends a fine collective performance on a beautifully meditative note.

Though Mortensson is clearly a special talent, it's the strength of the trio's chemistry that lifts this music into the realm of the sublime. An heirloom that will doubtless illuminate for generations to come.