Earl MacDonald and the Creative Opportunity Workshop: Mirror of the Mind

By Bruce Lindsay
November 15, 2013
Sign in to view read count 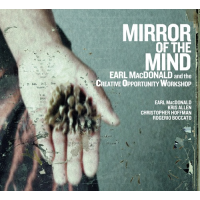 Death Defying Records, it says on the cover. A doom-laden title for a record label but any expectations of a frenzy of black metal or gangster rap are soon dispelled by the beautiful cello and piano interplay on the opening bars of the title track. Mirror Of The Mind, from pianist Earl MacDonald and the Creative Opportunity Workshop, is an album that surprises and delights—from the unusual piano, cello, sax and percussion line-up to the mix of styles and inspirations that influence MacDonald's writing.

MacDonald, Director of Jazz Studies at the University of Connecticut and a former musical director for Maynard Ferguson's Big Bop Nouveau band, has crafted an impressive array of tunes. The frontline combination of Kris Allen on saxophones and Christopher Hoffman on cello does much to establish the band's unusual sonic identity.

There are two covers. John Lennon and Paul McCartney's "Blackbird" is immediately recognisable, initially staying true to the original melody. This particular feathered friend is rather jollier than the original thanks to Rogerio Boccato's percussion and Allen's lively soprano saxophone. The mood of Arthur Hamilton and Johnny Mandel's "I Never Told You" is more sombre, Hoffman's cello playing adding a touch of melancholy to the tune's beauty.

MacDonald's own compositions range from the romantic ("Mirror Of The Mind") to the swinging ("Bottom Feeders") to the somewhat odd. "A Thousand Memories" is an all too brief pleasure, a heady mix of MacDonald's simple, repeated, riff and the interplay of tenor sax and cello. It's also an excellent example of Hoffman's warm, woody, cello tone which, when combined with Allen's tenor, manages to sound pleasantly similar to a bass clarinet.

While things are consistently interesting across Mirror Of The Mind, things get weird at a couple of points. "It Was Whispered" is full of angular, spiky, interplay between the musicians, a contrast with the more flowing melodies of most of the tunes.

The weirdness escalates "Where Thinking Leaves Off." The tune goes through periods of edgy, free-form music from each member of the quartet but it's most unsettling when laughter, verging on the maniacal, bursts out. A darkly dramatic episode in what is, for the most part, a much lighter and more upbeat set of compositions. Maybe Death Defying Records isn't so inappropriate a name for the label after all. Judging by the ways in which MacDonald and his colleagues take their creative opportunities, the band name's about right too.

Mirror of the Mind; A Thousand Memories; Beneath; Blackbird; Bidwell Cronies; Disillusionment; Miles Apart; It Was Whispered; A Priori Perception; Where Thinking Leaves Off; I Never Told You; Bottom Feeders.