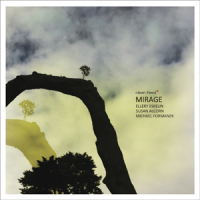 The The Rolling Stones, Yes, and other prominent bands have incorporated the pedal steel guitar into the rock vernacular. Here, pedal steel guitarist Susan Alcorn extends this instrument beyond customary Americana or Country & Western formats and becomes the link between modern jazz champions, tenor saxophonist Ellery Eskelin and bassist Michael Formanek. She builds a bridge for a program interspersed with traditional jazz improvisation metrics and ethereal treatments amidst Eskelin's bluesy phrasings and shimmering choruses.

Alcorn's artistry embeds an elastic underpinning into the grand schema. With abstract balladry, solemn explorations and supple flurries, Formanek's multi-purposed attack establishes the cadence for many of these works. The trio navigates through a mélange of sound-sculpting mechanisms, to complement certain movements that elicit notions of a warm blanket enveloping fragile three-way dialogues.

Alcorn's streaming treatments, summon a far-away place on "Divergence." But the trio mixes it up in true jazz-improv style, containing some hustle and bustle along with a sense of urgency during the pesky "Saturation." Formanek's many-sided articulations include nimble plucking maneuvers and contrapuntal support for the soloists, yet "Refraction" is designed on a spacey call-and-response oeuvre by Eskelin and Alcorn that could summon imagery of a mild-mannered dispute.

One of many positives relate to the musicians restraint and ongoing feedback, sparking a throng of subtle micro-themes, engineered with mutable tonalities and shadings. Even though the album firmly rides the experimental spectrum, nothing is overcooked or compounded by excessive soloing extravaganzas. The artists conspicuously respect the overall objectives by crafting a musical statement that communicates a great deal of forethought prior to execution.