By TROY DOSTERT
September 21, 2016
Sign in to view read count 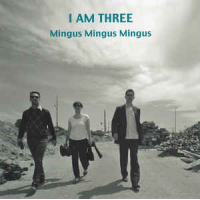 In addition to her many other projects, German alto saxophonist Silke Eberhard has made her mark by delving into the jazz tradition via her own distinctive, forward-looking sound. She collaborated with pianist Aki Takase in 2007 on Ornette Coleman's compositions (Ornette Coleman Anthology, Intakt), and she's done some fantastic work with her larger ensemble Potsa Lotsa in tribute to Eric Dolphy; in this regard, last year's superb Plays Love Suite by Eric Dolphy (jazzwerkstatt) is truly a must-listen for all Dolphy fans. It should be understood right from the beginning that Eberhard's treatment of these figures is never just a repertory exercise. Eberhard consistently brings a creative, risk-taking sensibility to her re-imagining of this material that always results in pushing the tradition forward—as we should expect from all of the best music infused with the spirit of jazz.

And this release is certainly no different. With trumpeter Nikolaus Neuser and drummer Christian Marien, Eberhard's latest project I Am Three involves a playful, energetic, utterly infectious exploration of the work of Charles Mingus. To tackle some of Mingus's best-known (and a few less-known) pieces without a bass instrument—or piano, for that matter—requires a certain audacity, but that's typical of Eberhard's approach, and here it works wonderfully, largely due to Eberhard's clever arrangements and the top-flight musicianship on display.

One conscious choice Eberhard made was to go short: that is, to limit the length of the pieces to around three to four minutes each on average. This boils each song down to its core, a distillation process that reminds us of how beautiful and profound Mingus's melodies were—something that could be obscured amidst the musical pyrotechnics of his sprawling live recordings in particular. In addition, the written horn parts for Eberhard and Neuser are outstanding. One never misses the richness of a larger group, even on an iconic big-band cut like "Moanin.'" Surprisingly, Eberhard's alto works perfectly for that opening phrase Pepper Adams's baritone made famous, and from there she and Neuser, fueled by Marien's relentless groove, produce a tour-de-force of trio improvising.

None of this would be possible without the phenomenal chops of these musicians. Both Eberhard and Neuser are capable of playing squarely in the pocket and also venturing out into the extremes of improvisation as well, although always in service to the music. They have an outstanding rapport, really digging into simultaneous solo passages that complement each other perfectly. And an absolutely essential component of this trio is the chameleon-like drumming of Marian. He's as likely to offer a funk-or rock-based beat as a straight swing rhythm, and his shape-shifting contributions do the most to give this recording its contemporary feel. The funky groove he moves in and out of on "Fables of Faubus" is irresistible in offering a completely distinctive flavor to the piece. Finally, we also have some of Eberhard's trademark quirks and idiosyncracies as well, just to keep the listener a little unmoored. "Jelly Roll" deliberately winks at the way the record as a whole is in dialogue with the past, by interspersing an "old-timey" vinyl sound (pops and crackles included) with the much more polished, digital-era sound of the rest of the track. And judicious use of electronics adds to the atmospheric quality of "Eclipse" and "Canon."

Of the many ways in which this record honors Mingus, it's really its spirit of inventiveness that stands out the most. A terrific accomplishment, and a strong contender for one of 2016's best releases.

Better Get Hit in Yo’ Soul; Fables of Faubus; Oh Lord, Don’t Let Them Drop That Atomic Bomb on Me; Opus Four; Goodbye Pork Pie Hat; Moanin’; Self-Portrait in Three Colors; Eclipse; Jelly Roll; In Other Words; Orange Was the Color of Her Dress, Then Blue Silk; Canon.

About I Am Three