Miles From India at SFJAZZ 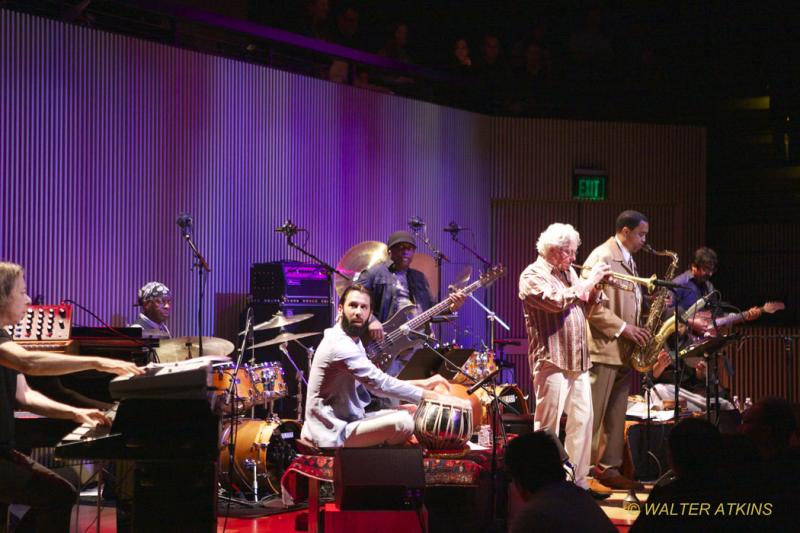 San Francisco's SFJAZZ supporters were treated to a special one time performance of Miles From India: A Celebration of the Music of Miles Davis based on the album of the same name. "Miles From India" (Times Square Records, 2008) reached number six on Billboard's Top Jazz Albums chart.

MFIB opened with Davis' adventurous "Spanish Key" with plenty of room for multiple solos, including Jackson's sax and Abbasi's guitar work. Their playing floated over the driving percussive beat while garnering loud applause. The Wilburn/Chancler dual drum assault anchored the evening and was balanced by the exotic percussive power of Selvaganesh and Raman. Other Davis classics selected from the band leader's pivotal "electric" period performed before the intermission were," "Miles Runs The Voodoo Down," "Blue In Green" and "All Blues."

The eminent Chancler discussed how the iconic trumpeter successfully combined Indian artists and sounds in the early 1970s. Davis had also progressively integrated talented Eastern musicians into his bands and tours playing traditional and modern instruments.

"Great Expectations," the ominously funky composition featured a playful sonic conversation among the Indian percussionists. They were complimented by a twin drum solo pulsing with polyrhythms to close the first stanza. The song with its pause & play moments received thunderous approval from the Miner Auditorium guests. The cordial house staff members nearby were also digging the musical energy.

The second half opened with an acknowledgement and dedication to the members of the album's original team, including arranger and producer Bob Belden. Some members of the original band passed away, and they had last played together around 2008. Belden and Yusuf Gandhi developed the idea of Indian musicians recording Davis material. The intriguing and delightful result was the 2-CD set performed tonight. In May 2015, the 58 year old Belden died in New York from a heart attack. Legendary musician and mentor Ghatam was then introduced and added another instrumental "voice" to the potent mix.

"In A Silent Way," written by former Davis band mate Joe Zawinul, had timely solos by Holzman and Jackson, and also featured another uplifting percussion chat. Listening to the non-verbal interplay was like hearing intimate friends talking in a relaxed and soulful way. After a well deserved standing ovation, the band members were introduced." It's About Time" had an unexpected "In a Silent Way" reprise added for extra measure. The long "IFE" was presented in both slow and astonishing fast tempos. "Jean Pierre," the standard set closer for Wilburn's Miles Electric Band, capped the amazing evening.

Holzman modestly talked about "keeping the original arrangements by Belden," and how he sequenced the order of the extensive solos to maintain "a balance between the music and the artists." His efforts contributed to the music's overall expansive quality.

Miles From India: A Celebration of the Music of Miles Davis, performed by the Miles From India Band, was a night of living breathing music with an inspiring Eastern flavor. It was meditative at times, and other times it was rhythmically explosive. This one night only performance was a rare musical banquet satisfying fans that liked their jazz fare blended well with Indian elements.