Miles Ahead: A Powerhouse Film, But is it the Truth? 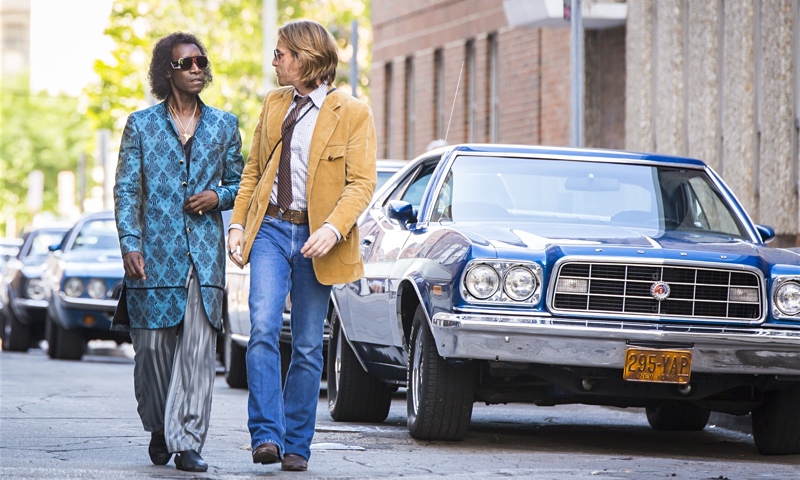 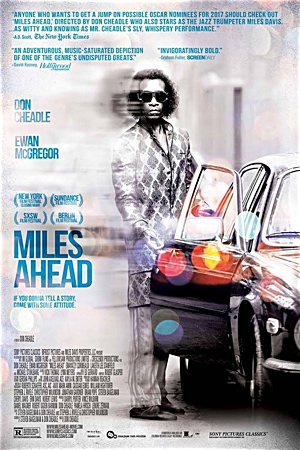 Miles Davis happens to have been actor Don Cheadle's long-time hero, and he mulled over the idea of a film about him for several years. In contemplating his directorial and screenwriting debut based on Davis' life, Cheadle could have chosen among several formats: a chronological account; the story of his music with documentary footage; or perhaps a "newsflash" version of key events from the trumpeter's tumultuous life and times. Instead, he chose "the road less travelled," though certainly not the peaceful one in Robert Frost's poem. Cheadle and co-sreenwriter Steven Baigelman concocted a partly imagined occurrence in Davis' life and turned it into a car chase thriller with flashbacks to key events from the past. The result is a film that is exciting from beginning to end but would confuse anyone trying to get a picture of Davis' personal and musical development.

For a period of five years in the late 1970s, the real life Davis' personal problems and addictions made him a virtual recluse in his home in Manhattan. In the film, a (fictitious) Rolling Stone reporter, Dave Braden (Ewan McGregor), comes to Miles' house in search of a hot story. After Davis punches Braden in the face, the two, thanks to Braden's persistence, gradually develop a trusting relationship, and Braden helps him to get cocaine from which Davis is jones-ing. As they snort together and Miles opens up about himself, one of Davis' session tapes is stolen from the home during a lady friend's house party by a young cohort (Keith Stanfield) of the crooked agent Harper Hamilton (Michael Stuhlbarg) who wants to sell it to Columbia Records, whose executives are eager to release a new Davis album, which he has denied them due to a financial snafu. There ensues a car chase where Davis and Braden find the cohort playing trumpet at the Village Vanguard and force him to lead them to Harper. In the confrontation with Harper, Davis is injured by a gunshot, is forced to come to terms with himself, and, with Braden's help, listens to the tape and is restored to enough sanity to resume his career. (All of this is fiction based upon snippets of facts.)

Into that scenario, the film deftly weaves flashbacks from Davis' life, most notably his early days as a leader, his racist arrest outside Birdland, a probing of his difficult marriage with ballet dancer Frances Taylor (Emayatzy Corinealdi), and a brief scene from a recording session with Gil Evans (Jeffrey Grover). The scene changes are transitioned by intense emotions that connect one to the other, which is how memory often works, and the movie becomes a seamless action thriller that, thanks to Cheadle's Oscar-worthy acting, provides a genuine sense of what many knew of the real Miles Davis, someone who railed at the Establishment and anyone he thought was phony, yet who had a sensitive inner core that drove him to intense love relationships and also led many musicians to form strong bonds with him. As Davis himself says, "I am a Gemini," with two personalities: the angry, violent warrior and the loving, creative soul, fighting for dominance within himself. Cheadle masterfully brings out both sides in a sterling acting performance that marks it as one of the great character portrayals of stage and film.

For musicians and aficionados like those who read All About Jazz, the gnawing question that will haunt this film is what it does for Davis' image and for the legacy of jazz. On the one hand, its energy, fluency, and empathy for the Davis persona finally gives a jazz musician a lasting place among those whose lives are chronicled in film. So many films about these musical heroes are unfortunately insipid and lackluster. This one is memorable. It sticks to your ribs. It gives Davis his rightful due as one of the great tragic figures of our time. On the other hand, its frenetic motion and lack of historical accuracy are insults to music history and the real lives of the incredible musicians who deserve accurate portrayals of their diverse trajectories. Almost nothing is portrayed of Davis' early life in St. Louis, his struggles with his father, his encounters in Paris, his remarkable creative efforts, his great quintets, his later marriage to Cicely Tyson, his abiding sense of guilt and shame, all of which is documented in his candid autobiography (Miles: The Autobiography by Miles Davis with Quincy Troupe, Simon and Schuster. 1990). Anyone who has read that book cover to cover will feel that the film is a comic strip version of a life lived to its extreme limits.

To be fair, Don Cheadle had to make difficult choices in setting up this film. He chose action over introspection, dramatic power over historical unfolding of truth, and character portrayal over life story. These are the legitimate choices of an actor in his prime directing his first film. If he had thought more about what an audience would take home as an image and recollection of the search for truth that makes jazz such an important cultural development, he might have made a very different film. In that respect, it's interesting to consider that while Miles Davis' life could make for a great action film, an equally fine film, and one devoutly to be wished, about John Coltrane would have to be centered around his music. There was nothing especially exciting about the way that Trane lived, other than that he was one of the greatest musicians the world has ever known. Davis' huge legacy as a twentieth century iconic figure who innovated new music, changed perceptions of African American creative artists, and shaped existential understanding of the human condition is only superficially acknowledged in this film, mainly by Cheadle's stunning character portrayal.