By DUNCAN HEINING
November 7, 2013
Sign in to view read count 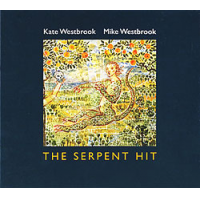 Mike and Kate Westbrook have a reputation for tackling big subjects—war, European history, life and death and the nature of art and creativity. With The Serpent Hit, they turn their attention to perhaps the grandest subject of them all—the fall from grace and the loss of paradise.

This beautifully packaged CD features a gorgeous cover painting by Kate Westbrook that could easily have sprung from the wall of a 14th century Italian church. We start with this because it offers a key or clue to what lies inside and therein lies much indeed. The Serpent Hit is more than a rewriting of the Judeo-Christian creation myth or an examination of the meaning of sin. It's more an exploration of personal, and even, species responsibility.

Listening to the music, the first impression struck by Kate Westbrook's lyrics is their riddle-like complexity. This aspect of the Westbrooks' work is one of its pleasures, one that reveals its gifts slowly. A number of motifs appear. There are repeated references to circles and spheres—the merry go-round and stone in "Throw," the potter's wheel in "Lob," the whirlpool in "Hurl," the Earth itself in "Trigger" and "Strike," the apple in "Strike." The imagery at times suggests the possibility of momentum but either brings this to a brutal halt ("Trigger") or suggests that forward movement is all too often a circular illusion rooted in the repetition of human error and vanity ("Strike"). Nevertheless, at the center of all of these circles, lies not a hint of contempt or hopelessness but rather the same love and respect for nature and the planet that one finds in Kate Westbrook's landscape painting. This may be a Cri de Coeur but it is one that comes with a wake-up call and which understands that sins may arise from many motives.

The Serpent Hit is inevitably a complete work that combines music, lyrics and images to rich effect. It is a remarkable collaboration from two artists, who continue to surprise and, sometimes, to confound. Mike Westbrook's music is written for saxophone quartet and drums. Over the years, Westy has developed the ability to transform small musical resources into grand conceits—a metaphor, maybe, concerning how we might better manage the environment and our place within it. Beautifully played by Chris Biscoe, Karen Street, Andy Tweed, Chris Caldwell and, most notably, drummer Simon Pearson, the music has flow, humor and a capacity to shock where necessary.

At times, Westbrook's score supports the notion of circularity. The opening theme of "Throw" recurs, sometimes beginning a new tune before spiraling off in new directions or else offering a refrain to emphasize a point lyrically and musically. Genre provides a source of play for the Westbrooks. For example, here, a rock and roll vamp appears on "Pitch," whilst elsewhere the piece echoes Kurt Weill's awkward syncopation. But most of all, this is music of texture and timbre and it is the music as much as the lyrics that give The Serpent Hit its fullest meaning. Nowhere is this more evident than on the long closing track, "Strike."

The piece moves between an ethereal, extended section that recalls Westbrook's own "Landscape" (from Marching Song) in its feeling of unworldliness, on through a near-operatic section and through ragtime and bebop. It then builds into a "Broadway" finale, albeit refracted through the Weill-like sensibilities, as Kate Westbrook sings, "Man thanks the Lord on bended knee/The serpent coiled around the bough/And smiling at the man, and how!/Snake leads him to break his vow,/The scaly wily serpent/Man from the apple bites a bit,/And, once again, The Serpent Hit." Music this fine needs to be savored—one bite is never enough but, then, perhaps that's the problem.