By Glenn Astarita
November 7, 2013
Sign in to view read count 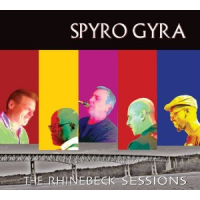 In 2014, the Buffalo, NY band Spyro Gyra will celebrate its 40th anniversary. Indeed, a remarkable feat. Well-known for cross- pollinating contemporary jazz with jazz-fusion, the musicians merge an amenable game plan with engaging melodies and largely buoyant grooves amid a sense of bravado, stemming from their formidable chops and intense improv segments. The group locks into a bevy of spunky motifs, complete with tuneful hooks and pumping rhythms. They delve into jazz-funk, Latin and mainstream jazz, along with a few works that intimate romance or lament.

In true jazz fashion, the artists' stretch out and colorize the grand schema with the acoustic-electric instrumentation mix. And they deliver an interrelated array of thematic movements , including the edgy sax and guitar driven ballad "Wishful Thinking," where they craft several emotive attributes via Jay Beckenstein's singing sax lines and Tom Schuman's jazz-blues piano voicings. Here, they bridge melancholia with optimism.

"I Know What You Mingus"—a sly play on words—is a modern mainstream swing vamp, extended with alternating tempos and Beckenstein's gutsy soul-drenched solo spot as drummer Lee Pearson takes the band towards the finale with a sweeping polyrhythmic breakaway. Needless to state, the quintet's dynamism yields a hearty exhibition and the memorable choruses—in a loose sense—serve as timestamps for the soloists' diversionary tactics and revved up soloing jaunts. For example, on the perky "Clubhouse Jam," the frontline generates odd- metered contrasts and punchy accents, largely executed by Schuman's brisk electric piano block chords and synth phrasings. Otherwise, Pearson knocks it out of the park during "Odds Get Even." 39-years as a musical entity parallels the celebratory vibe that is strikingly discernible on The Rhinebeck Sessions.

Serious Delivery; Wishful Thinking; Not Unlike That; Sorbet; I Know What You Mingus; Off The Cuff; Clubhouse Jam; Odds Get Even; Who Knew!