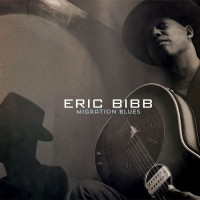 Eric Bibb says in the sleeve note to Migration Blues, his most politicized album to date: "The way I see it, prejudice towards our brothers and sisters who are currently called 'refugees' is the problem. Fear and ignorance are the problems. Refugees are not 'problems'—they are courageous fellow human beings escaping dire circumstances."

Not the way Donald Trump sees it.

Bibb, probably America's most important folk blues artist, shouldn't have much to fear from Trump, thanks to his own migrations. He lives in Scandinavia and records in France. But he says: "With this album I want to encourage us all to keep our minds and hearts wide open to the ongoing plight of refugees everywhere. As history shows, we all come from people who, at some time or another, had to move."

He mixes American folk music "classics," such as Woody Guthrie's "This Land Is Your Land" and Bob Dylan's "Masters Of War" with his own songs about the current refugee crisis. "Prayin' For Shore," a gospel-based tune about the exodus from Syria, is all the more powerful for its understated vocal: In a ol' leaky boat/Somewhere on the sea/Tryin' to get away from the war/Welcome or not, we got to land soon/Oh, Lord—prayin' for shore.

Even when his songs have no words, there an underlying statement of sorts. On the instrumental title track he plays a resophonic 12-string guitar bought in Germany, end destination for most Syrian refugees. Not that any of them could afford such an instrument.

Bibb also finds inspiration in the distant past, citing Roman orator Cicero: "To be ignorant of what occurred before you were born is to remain always a child. For what is the worth of human life, unless it is woven into the life of our ancestors by the records of history."

"Delta Getaway" trod this path, based on the story told him by "a blues elder" of a migration that took place in the US long before Bibb was born: flight from the murderous Deep South to the relatively free industrial north.

"Brotherly Love" is a reaffirmation of faith in the peaceful transformation of society of which that exodus was part. Meditating on the paranoid pronouncements of the present incumbent of the White House, Bibb says: "As dire as our situation is, I still believe that the compass of brotherly love can guide us safely to peaceful shores."

Refugee Moan; Delta Getaway; Diego’s Blues; Prayin’ for Shore; Migration Blues; Four Years, No Rain; We Had To Move; Masters Of War; Brotherly Love; La Vie Est Comme Un Oignon (Life Is Like An Onion); With A Dolla’ In My Pocket; This Land Is Your Land; Postcard From Booker; Blacktop; Mornin’ Train.