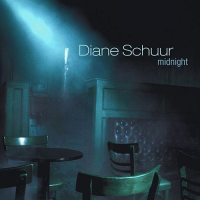 Diane Schuur has been singing for an adoring public since the age of nine. Those who have praised and supported her talent include Count Basie, Dizzy Gillespie, B.B. King, Stan Getz and Leonard Feather. She has been nominated five times for Grammy Awards and has received two, for Timeless in 1986 and Diane Schuur with the Count Basie Orchestra in 1987.

Midnight is a video-enhanced CD, Schuur’s third release for Concord Records and her first under the tutelage of Barry Manilow and his co-producer, co-writer and arranger, Eddie Arkin. Over the course of a year, Manilow, Arkin and their lyricists Marty Panzer, Bruce Sussman and Adrienne Anderson composed thirteen songs for Schuur; two of the selections feature lyrics by Johnny Mercer.

The attempt to create and maintain a smoky, after-hours ambience is generally successful, with good variety, order and pacing; Dan Higgins’ alto sax solos are especially poignant and communicative. The chemistry between Manilow and Schuur seems felicitous; the CD is produced and polished to a slick sheen, with big-name jazz and soul soloists, well-harmonized arrangements, and an orchestra of glistening strings conducted by Jorge Calandrelli.

Schuur’s vocal instrument is in its usual fine form, with good rhythmic and harmonic sensibilities, three-plus octave range, and impeccable intonation (although her emotional intensity sometimes causes her to over-sing and her vibrato to become tremulous). The guest appearances by Allyson, McKnight and Manilow each fit their respective selections and arrangements to a tee.

Those who like their music lush, polished, dramatic and emotional are apt to find this CD to their liking. Those who like an edge to their jazz, a spirit of adventure and unpredictability, would probably do well to look elsewhere.

Meet Me, Midnight; When October Goes; Stay Away from Bill; I'll Be There; Consider the Point from Both Ends; What Is Love?; He Loved Me; Southwind; Our Love Will Always Be There; No Heartache Tonight; Good-Bye My Love; Life Is Good; Anytime