By Douglas Payne
February 13, 2009
Sign in to view read count 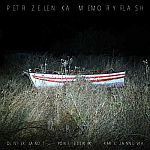 Czech guitarist Petr Zelenka brings an edgy warmth to jazz that isn't heard too often these days. There are occasions when the guitarist recalls Jim Hall, whose harmonically advanced yet melodically rooted lines not only quelled the abstractions of Chico Hamilton and Jimmy Giuffre but spiked the pretty sparkles of Paul Desmond and Bill Evans. And yet, Zelenka also brings an unpredictable European sensibility to his music that is reminiscent of many ECM productions—that sense of wandering off from the rhythmic, melodic and predictable path.

On Memory Flash, Zelenka's stand-up-and-take-notice debut, he's assembled a lyrical program that shows as much insight and imagination as it does inspiration and invention. His quartet features Olivier Zanot on alto and soprano sax (a ringer for a younger and less brash Jan Garbarek), Yoni Zelnik on bass and Karl Jannuska on drums and percussion. The group is a cohesive whole that well understands Zelenka's conceptions (the guitarist composed all eight pieces here) and what he strives to achieve.

Surprisingly, it doesn't feel like a guitarist's album. This is the sort of melodic outing that drummers Chico Hamilton or Paul Motian would conceive, with the horn player seemingly in the lead. It's not that Zanot gets the majority of playing time as much as it is a testament to Zelenka's ability to craft a democratic environment that allows for invention by a group that works well as a musical team. In other words, Memory Flash is not dominated by any one instrumentalist. It's a true jazz quartet.

The music itself is vividly impressionistic. Always melodic and "inside," there is a certain freedom present, particularly during the many subtle counterpoints the musicians provide to one another. Zelenka's best compositions are the longer ones, where the quartet gets to dive into interesting exploration. It also prompts the guitarist's best solos: "Hidden Time," the disc's hardest swinger; "Infiltration," which launches the guitarist into a hypnotic Indian dron; and the animated "Za Sedmero Horami," an adventurous piece that finds all players—especially Zelenka—at their best. "Melting Point," in particular, shows how effectively Zelenka and company canvas an entire tableau with very few notes, while Zelenka himself glides beautifully through "Lost World."

While Memory Flash delivers a strong group of players working well together over a very reasonable 52 minutes, it falls a little short of being ultimately memorable. Zelenka's compositions are always interesting—almost contemplative—but offer little in the way of keepsake moments or something to walk away with. But that may well be the point. Given the disc's title, it's little wonder that Zelenka has fashioned something so engaging while it's on and so difficult to recall in anything greater than flashes when it's not. Still, it's a flash worth noticing and one that will hopefully grow brighter as guitarist and composer Petr Zelenka continues working with this simpatico quartet.