Melody Gardot at the Merriam Theater 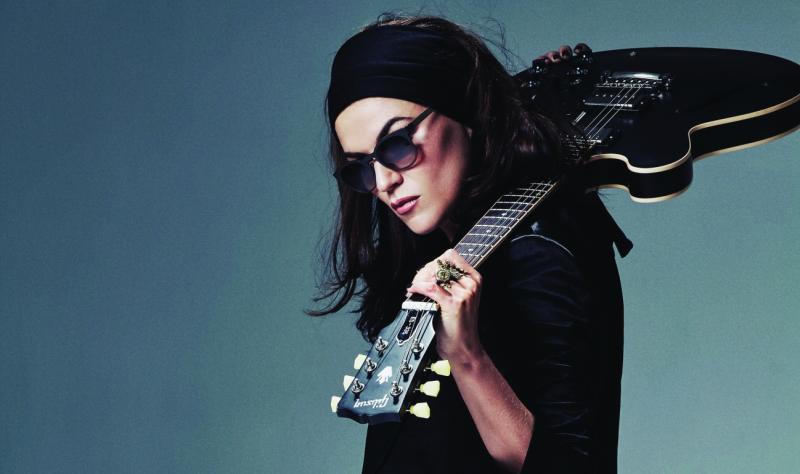 In this highly touted concert, Philadelphia born and bred vocalist Melody Gardot made a return visit to her home town after several years on the road in Europe and other destinations where her stunning voice and soul-stirring original songs have grabbed the world's attention. Her loyal fans know her life-changing story of a bicycle accident and the severe brain trauma it inflicted, with music playing a crucial role in her recovery. With a sense of anticipation and excitement, a full house turned out at the Merriam Theater in Center City to dig the music and show their support for a beloved and highly successful one of their own. The singer was obviously moved by the enthusiastic reception she received. Several times, she paused and told the audience "I love you" and "I miss Philadelphia."

In a previous Philadelphia engagement at the Kimmel Center in 2009, Gardot's musical persona was that of a high energy cabaret singer telling stories of love, romance, and emotional wounds, coming across as a Parisian blonde bombshell with a touch of Madonna. In the current concert, her persona was strikingly different, namely, that of a 1960s-70s soul rock diva with a gospel flair and a strong social message. This change in approach parallels the fact that her previous show followed upon the release of her albums about relationships, Worrisome Heart (Verve, 2008) and My One and Only Thrill (Verve, 2009), while this concert included mostly songs from her new album, Currency of Man (Universal Music, 2015), with arrangements by Clement Ducol and Jerry Hey for a larger ensemble capturing the rhythmic pulsations of soul music garnished with a touch of acid rock.

Gardot's deeply formed jazz roots, which she honed in small local clubs, are still manifest in her fluent and melodious voice capable of the most subtle and meaningful inflections, and a jazz oriented rhythm section (Mitchell Long: guitar; Edwin Livingstone: bass; Devin Greenwood: keys; Chuck Staab: drums), along with two versatile saxophonists, Korey Riker and Irwin Hall, and a knock-out trumpet player, Shareef Clayton. While the horn players parodied a soul group by shifting their bodies and horns to the left and right like Motown backup singers, and while they affected a grunge sound, their improvisations were often subtle and complex, and at one point Hall played tenor and alto saxophones simultaneously in the manner of jazz icon Rahsaan Roland Kirk. Gardot and her group created an effective synthesis of rock, gospel, and jazz idioms that had a powerful impact on the audience. Gardot stands with Amy Winehouse as one of few vocalists who is equally at home with multiple genres and can milk the hell out of any of them.

While some of the songs, such as "Our Love Is Easy" and "Baby I'm A Fool," were from My One and Only Thrill, most were from the Currency of Man album. As the title suggests, she is dealing there with the full range of collective human suffering, struggles, and joy, as if to say, "Let's all join together. We are all in the same boat." And it's not so much a protest against evil as an observation of the contemporary scene with a plea for greater compassion and understanding.

For example, the lead song of the album, which she used as an encore in the concert, "It Gonna Come," is about the plight of the homeless people in Los Angeles, where she spent some time and was moved by the interactions she had with some of them. The song is a ballad with an R&B rhythm, and her voice quietly stated its point while the band's intense pulsations brought out the persistent distress of these marginalized members of our society. "Same to You," with a stronger rock-gospel sound, conveyed the message "What goes around comes around" with a prophetic warning that if you betray someone you love, you'll pay a price for it. Hence, the horn players went all out with their gymnastics and heavy duty gruffness.

The climax of the evening was "Preacherman," which told the story of Emmett Till, the African American teenager in Mississippi who was ruthlessly beaten and killed for allegedly flirting with a white girl, an event which fueled the Civil Rights movement in the South. The song is a dirge, but it gradually builds in intensity to virtually an acid-rock climax that says change is in the air. Here and elsewhere, Gardot borrows heavily from many aspects of the musical culture of the 1950s-1980s, from rock and roll to jazz fusion and everything in between. The overall effect was to take everyone back to a time of revolution and social change.

Songs: Don't Misunderstand; 12/8 Interlude; Same To You; She Don't Know; Bad News; March For Mingus; Morning Sun; Our Love Is Easy; Baby I'm A Fool; Who Will Comfort Me; Preacherman; It Gonna Come.