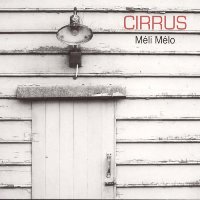 Norwegian group Cirrus started life as a drummerless trio when singer Eva Bjerga Haugen, saxophonist Inge Weatherhead Breistein and bassist Theodor Barsnes Onarheim met while studying performance and improvisation at the University of Stavanger. The final piece of the puzzle fell into place when teacher and drummer Stein Inge Braekhus joined for this debut recording, bringing a heightened sense of groove and shifting dynamics to what is essentially chamber jazz. Though the strikingly gifted Haugen may garner most plaudits for her ethereally beautiful vocals, the real power in Cirrus's debut lies in the interdependence of its four members who together constitute a compelling, unified voice.

Haugen's horn-like wordless vocal harmonizes with Breistein's tenor on the dreamy intro to "Finlande." Onarheim's bass ostinato lends pulse as the singer's French-sung tale of love and passion unfolds. The images of an empty bottle, a discarded shirt and a lover in bed carry poetic conviction when sung in French, and more so when delivered by a voice as pure and sensuous as Haugen's. Her sultry, come-hither tone is followed by a robust, snaking tenor solo, which, propelled by Brakehus' percussive accents, gathers wind in its sails. The storms of passion gradually abate, inviting Haugen's re-entrance, but the coals of a simmering tension remain aglow. It's a stunning opener that lingers in the memory.

"Un Jour de Glorie" inhabits a space somewhere between jazz and experimental pop. A repeating vocal/sax motif serves as launching pad for bass and drum solos, and whilst these improvisations quicken the pulse they never overwhelm the quartet's fine tuning on a composition that's all about ambiance. "Street Organ Donor" glides between hushed minimalism and gentle swing, with Haugen—alternating between English lyrics and wordless voice —utterly captivating. The singular "Not The End" begins with a three-minute unaccompanied saxophone improvisation before morphing into spoken-word jazz poem punctuated by free improvisation. Breistein and Haugen feed off each other's energy, with the singer's non-syllabic utterances exploding in clusters.

"Lucky Number 13" veers between the coiled energy of circular riffs and the haunting balm of voice, saxophone and arco in arresting harmony. The shifting soundscapes of this number, whilst striking, are also seamless, which is testament to the group's collective writing strengths.

Even by Norway's heady, incredibly eclectic standards, Cirrus' stunning debut marks it out as one of the most original groups to have emerged for some years. Tuneful yet experimental, grooving and beautifully haunting, Méli Mélo is a breath of fresh air that seems set to launch Cirrus onto the major touring circuit. Essential listening.