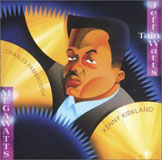 These days, the appearance of a "lost" jazz disc usually means that an old disc is being reissued with perhaps a few alternate takes and new artwork. It's rare when a work appears that is not only brand new but exciting. Such is the case with Megawatts, the first recording as a leader by drummer Jeff "Tain" Watts, recorded in 1991 but not released for contractual reasons. The disc has finally been liberated, however, and it's an event to be savored, for not only are we treated to the slam-dunk drumming of Tain and the outstanding basswork of Charles Fambrough, but the jazz community gets another chance to hear the incomparable pianist Kenny Kirkland, who passed away in 1998.

The disc opens with Wayne Shorter's "Black Nile," a song which immediately brings to mind "Softly, As In a Morning Sunrise." This song belongs to Kirkland from the first note. His dazzling interior dialogue at the keyboard is astonishing. Tain thrashes beneath and when Kirkland directly quotes "Sunrise" Tain tattoos the drums in acknowledgement. After Fambrough plucks his passionate solo, and Tain lays down an Elvin Jones-caliber statement, the song concludes with a sexy bit of Latin rhythm, with the leader having the last word.

The pace slows with Fambrough's ballad "Alycia." Kirkland's delicate and thoughtful ideas on the piano, Tain's cymbal-driven pacing, and Fambrough's strong solo mesh perfectly. But then it's back to burning with the leader's composition "The Impaler." At the end of the song Kirkland and Fambrough repeat the vamp as a foundation for Tain's cyclonic drum play, until the song winds down to a hush.

And the hush is Keith Jarrett's "Rainbow." Tain switches to brushes on this go-round, while Fambrough's strong plucking and Kirkland's ever expanding ideas glorify a composition by one of jazz's standard bearers. "Kasploosh," another Fambrough tune, features a great bass solo by the writer, as well as the usual stellar work from Watts and Kirkland.

Tain's humorous "Dance of the Niblets" opens with a throbbing Tain statement, followed by Kirkland and Fambrough falling in. Vaguely Ornette-ish in its construction, Tain plays his solo with the polyrhythmic intensity of Max Roach. The closing tune, "Blooski," is an impromptu blues that fades out, leaving the listener wanting more. This is the same way Kenny Kirkland slipped away from us: leaving listeners wondering what waited on the other side of the silence.

Black Nile, Alycia, The Impaler, Rainbow, Kasploosh, You and the Night and the Music, Dance of the Niblets, Opal Rose, Blooski