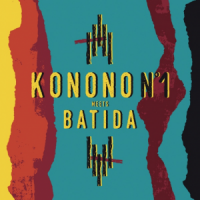 The city of Kinshasa, in the Democratic Republic of the Congo is the home of Konono No.1 a band which has taken the African likembé (thumb piano) from a folkloric instrument, into the electronic age. Back in the sixties, it's founder Mingiedi Mawangu figured out how to amplify the likembé, using salvaged car parts, and wired it through a guitar amp. Though he passed in 2015, his son Agustin Makuntima Mawangu carries on as leader, maintaining the amplified likembé as its primary instrument. On Konono No. 1 Meets Batida, the band continues to forge pioneering sounds combining ancient Bakongo music with the blend of Angolan kuduro, semba and afro-house sounds popularized by Pedro Coquenão, better known as Batida.

Since it's influential "Congotronics" (2005 Crammed Discs) release, Konono No. 1, has taken their tribal bazombo trance music into uncharted territory on three more releases, and received a Grammy in 2010, for their participation with Herbie Hancock on "The Imagine Project," where they were featured on the title track. The piano technique utilized by Hancock on this song, is his interpretation, and appreciation, of the likembé style played by the group. Their latest collaboration, with Angolan/Portuguese artist Batida, was recorded in his garage studio in Lisbon, and showcases the band in a more cosmopolitan afro-fusion setting, while maintaining their trademark celebratory sound.

There are bass, mid, and treble modified likembés, which are supported by an assortment of percussive instruments, a drum kit, hand clapping, as well as pots, pans, and car parts. The vocalizing is performed in a chanting call and response, with hypnotic rhythmic repetition. All the instruments as well as vocals are going through an invented PA system using megaphones as speakers. All these elements are essential in what is recognized as the Konono No. 1 sound, basic and improvised, yet effective.

"Nlele Kalusimbiko," featuring Bissau-Guinean poet AF Diaphra on vocals and Papa Juju on guitar, sets the pace for what will be an enthusiastic experience. "Yambadi Mama," highlighted by lead vocalist Pauline Mbuka Nsiala, fades into an improvisational likembé reverie. Agustin Makuntima Mawangu takes over as singer on "Tokolanda," and guest vocalist Selma Uamusse is brought in on "Bom Dia," which is a voice, clapping and percussion arrangement without the likembés. Batida fuses his electro guise into "Nzonzing Familia," for a synth sampling variation, and they maintain their aggressive propulsion on "Kuna America," with a crucial likembé staccato pattern that leaves no room for passivity. The relentless speed is maintained on the closing "Um Nzonzing," a spellbinding excursion into a séance of endurance. This band made their reputation on their tribal trance repertoire which is festive in nature, repetitive in structure, and highly energetic. This session maintains this criteria, and then some.

Konono No. 1 has taken their music from its ancestral origins in the Congo, to international recognition and success. Their unique variety of creativity has been influential not only in their homeland, but has been sampled and remixed by a host of electronic gearheads and DJ's who found inspiration in the unique timbres of electric likembés. This collaboration with Batida is another affirmation that they will continue to be currently relevant, while maintaining a faithful connection with their native roots.