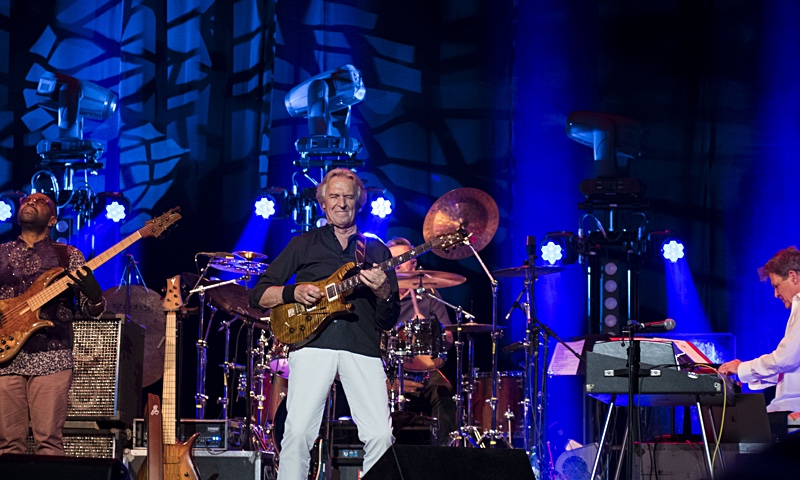 When it comes to virtuosi, guitarist John McLaughlin ranks high in the jazz fusion world. Having the early fortune to connect with legendary drummer Tony Williams upon arriving in New York from his native England, McLaughlin's spirited approach found favor among both rock and jazz devotees. As the '60s ended and a new decade approached, the guitarist added to his resume work with Miles Davis and the subsequent forming of his own ensemble. The Mahavishnu Orchestra debuted in 1971 and over the course of their brief existence logged in the highly acclaimed albums The Inner Mounting Flame, Birds or Fire, and Visions of the Emerald Beyond.

Although McLaughlin's legacy reaches far beyond his groundbreaking work with Mahavishnu, it is this body of material that served as the forefront of his farewell U.S. tour which kicked off November 1st. The 75-year-old guitarist has spoken about his battles with arthritis and his desire to go out on top. So while he will continue to play and record, he has stated that this outing will be his last to involve traveling around the globe. Marking roughly the midpoint of the twenty-three dates comprising his Meeting of the Spirits tour, this three set/three-hour extravaganza made quite an impression on a sold out crowd at the Michigan Theater in Ann Arbor.

A jam band favorite and currently the guitarist with the group Widespread Panic, Jimmy Herring has been on the scene for almost 40 years and boasts a resume that includes time spent with such folks as Col. Bruce Hampton, Billy Cobham, and Phil Lesh. In fact, it was at a 2015 reunion concert for Hampton and his Aquarium Rescue Unit that McLaughlin had a chance to play with Herring and later decided to make him a part of the farewell tour.

The first set featured about 35 minutes of music from Herring and his band The Invisible Whip. It would be fitting that their opening tune would be "John McLaughlin," one of the numbers from Miles Davis' visionary album Bitches Brew. Over the course of about a half dozen numbers, Herring demonstrated his command of the guitar with bristling solos filled with emotion and a strong sense of direction. There was a marvelous degree of variety in his operational muse as well, recalling a great range of styles from Dick Dale to '50s cop show themes to overtones of the Mississippi Delta. As has been noted by more than one observer, Herring might just be the best guitarist you probably have never heard of before.

Wedged in between Herring's opening gambit and the extended jam session that would close out the evening, McLaughlin and his group the 4th Dimension would cover some serious ground of their own. Part of the allure here would be the mere technical brilliance of the guitarist's sidemen. An accomplished keyboard man and drummer, Gary Husband has a long standing relationship with McLaughlin's music and it showed. Bassist Etienne Mbappe dazzled with his own set of killer chops, donning black gloves while he played. Rounding things out, drummer Ranjit Barot alluded to the polyrhythmic influence of his Indian heritage, spurring on an advanced drum battle with Husband at one point in the show.

McLaughlin's "El Hombre Que Sabia" offered many rewards with its Latinesque groove and quick fire tempo. A lush keyboard intro ushered in "Light at the Edge of the World," a feature for the fleet-fingered work of M'Bappe and a stellar closing cadenza by McLaughlin who even managed to squeeze in a quote of "It Might As Well Be Spring." The previously mentioned drum off between Barot and Husband came during the course of "Meeting of the Spirits." Recalling popular tabla cadences like the tihai and chakradar, Ranjot would sing a rhythmic passage which would then be developed further by Husband. These patterns were at the heart of many of the pieces and Husband could be seen using hand motions when he wasn't playing to indicate the irregular beat patterns.

During the third set, both bands would take the stage, with Herring and crew on the left and McLaughlin's unit on the right. Pieces like "Lotus on Irish Streams" and "Eternity's Breath" offered plenty of room for blowing with Matt Slocum almost stealing the show with his B3 and clavinet statements. Jason Crosby would also bring an authentic flavor to the proceedings with his violin playing. "Birds of Fire" and "The Dance of Maya" served their purpose as incendiary vehicles for the guitar histrionics of both McLaughlin and Herring.

A true sense of camaraderie and ebullient inspiration marked this fortuitous occasion and the crowd was clearly mesmerized by the results, demanding an encore which was provided without hesitation. McLaughlin's powers have clearly not diminished and he indeed will be going out on top during this momentous and important last stand.