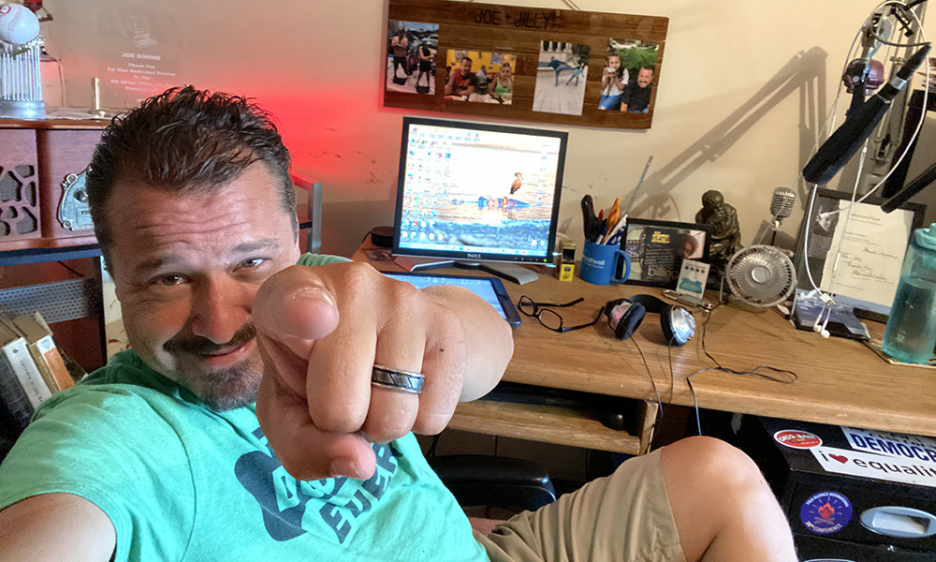 I am a recovering sports journalist. I began Neon Jazz as a labor of love back in 2011. I have a Communications degree from the University of Missouri-Kansas City and I've always wanted to be in broadcasting. It took quite a bit of time but I found the greatest people in the world. Jazz folk are the most humble, talented and cool set of people on the planet and I'm proud to cover their art.

Nothing specifically jumps out, but I remember in WHB (Kansas City) was the station I listened to in the car with my dad.

I always wanted to be in the media in some capacity. It started with newspapers and then it moved onto radio. Eventually I wanted to be on TV. After I got into sports journalism, I took a big break from the entire scene. It wasn't until I heard a radio show called the Neon Beat with John Christopher that I was interested in doing radio. After writing an article on him in a local newspaper I was freelancing for and knowing that he lived conveniently blocks away from me, he invited me over to his home studio. He told me to write a script and I picked jazz. Since 2011, it's been 658 shows strong and I owe it all to John Christopher for showing me the kindness, integrity and reality of a dream I always had within me.

I was a huge fan of Mike Pettengell's Jazz in the Kight on KCUR 89.3 here in Kansas City. His presentation and selection of songs were the best that I have ever heard. That was my baptismal into the world of jazz and I never looked back. I always thought being a jazz radio host would be one of the coolest jobs in the world.

It officially began in Parkville, Missouri at a college radio station at Park University called KGSP in 1994. It was an alternative music radio format and I'm certain they're only three people listening to it. Me, my co-host and somebody that accidentally tuned in. From there, I concurrently was doing pre-and post-production for the Kansas City Royals radio shows at 61 Country on Signal HIll in KCMO as an intern.

My all-time favorite broadcaster is Bob Costas. I actually met him in St. Louis at a Sports Broadcasting Camp back in 1993 and he was quite cool. But in all reality, it is John Christopher of the Neon Beat that showed me the way and he has always been a consistent friend and mentor.

I believe the first song was "Move" by Miles Davis off The Birth of the Cool. The album Kind of Blue got me into the world of jazz. My son's name just happens to be Miles.

Neon Jazz is an independently produced radio show out of my home and John Christopher's studio in Belton, Missouri. My home is in Lee's Summit, Missouri and is the new official home of Neon Jazz. My radio show is currently on KCXL 102.9 FM out of Liberty, Missouri, on KPGZ 102.7 in Kearny, MO and out of the Mutual Musicians Foundation at 104.7 KOJH in the heart of 18th & Vine Jazz District.

My goal with each and every Neon Jazz episode is to focus on the modern music that is happening now and pay respects to all the music that came before us. I also make it very clear in interview clips with musicians. It is their craft, their voice and their story. I want to ensure that comes through very loud and clear.

From the construction of songs, writing of the script, recording of the voiceover and the final edit, it will take anywhere between an hour or two to get a final show put together and uploaded to Mixcloud. Then, it's posted for all the stations to fetch and play each week.

My preference is vinyl. But at the end of the day I love to drive around and listen to CDs and I am also very good as a digital person getting links to music. Yet, if I really want to hear a jazz album in the right format it has to be on a turntable via vinyl.

It is all about that sonic cherry that the musician puts on the sundae. It is hard to describe exactly what that is, but I know it when I hear it. And then when it comes to interviews, it is always about how humble, open and gracious these musicians are with dispensing their story and their tales of this rich American art form.

Most of the engagement I get from my audience is through social media. Funny enough, most of the interactions that I have are with jazz musicians. I will get notes here & there, but overall my main audience that I interact with on a regular basis are the musicians and they are the biggest fans of my show

I don't get the actual statistics back or any kind of report on audience share, but I would say that musicians and jazz lovers are the main people that listen to my show.

I believe the lines are getting blurred between both now. My show is presented in an equal split of internet and terrestrial radio. I think at this point both formats are going to be vital in keeping radio alive. They need to work together in a symbiotic relationship to ensure the radio format state vital and fresh in America.

I would have to go back to my beginnings of Neon Jazz and pick Miles Davis. Perhaps "'Round Midnight." Then I would top it all off at the end with Charlie Parker. I think "Parker's Mood" would be appropriate for this KC-based show.

My favorite radio station is KCSM out of San Francisco, CA. I really enjoy Dick Conte and I dig all of the radio hosts on that station. I used to listen to Mike Pettengell on KCUR 89.3. I also had some quality time listening to Bob McWilliams on Kansas Public Radio (KPR). Back in the 1990's, I used to live up the street from the Folly Theater in Downtown KC and won tickets quite a bit by calling into Bob. I saw a lot of quality cats live from those shows like Houston Person and Tom Harrell.

Can you share a fun story that happened during your radio career?

There are so many moments that I share with John Christopher when we construct our show. We haven't been around each other for months because of the pandemic in the new coronavirus world we live in. But each week I'm with John Christopher the hilarity ensues. There are always moments where we do things that are totally off the cuff and we make the show together as enjoyable and funny as possible. But I would have to say one of the most memorable experiences was doing a live remote for the very first time at Papas Coffee Express in Liberty, Missouri with John Christopher circa 2013 and time flew by so fast. I had no idea how quick it was when you actually do it live. All of my shows are pre-recorded, so I have a very firm sense of time and it takes a while.

I'm a sucker for a hooky riff or a jingle. It could be a song or a commercial off the TV.

I would love to sit down with Miles Davis. I have heard so many stories and had so many interpretations of who he was and how he was and I have seen so many interviews with him. I think having a tough interview like that would be huge. I was fortunate to interview Sonny Rollins and that was a dream come true. It was certainly very close to that Miles strata.

I recently came across a record called The King of Sudanese Jazz. I actually interviewed the author of this cool sound Sharhabil Ahmed. The album is one of the most unique jazz sounds I have ever heard in my life. It is something that all jazz lovers and even music lovers should listen to. It is on the top of that mountain of unique.

Since 2011, I have asked musicians how healthy jazz is in a particular year and now that I've done hundreds of interviews with musicians, I can safely say that jazz is thriving. The amount of shows that just one musician has had to cancel has been staggering. Jazz is healthy and alive in the world as we know it.

I think having quality education at universities around the world are bringing so many great musicians into the fold. The most important thing from all the interviews and talking to elders is to keep the stories and narrative of jazz alive. The elders passing the flame and the youngsters making that flame into a brighter entity is huge.