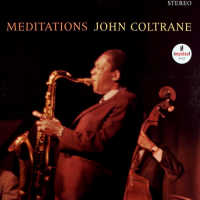 One man's meditation can be a migraine to another. By the early '60's, John Coltrane found himself moving ever further away from traditional forms of musical expression, and into what could be described as uncharted territory, even for jazz. So much so that the saxophonist's influence and ability to break down barriers not only within his own relatively elite circle extended itself into the ever growing rock fraternity, to the extent that bands such as The Byrds and Santana cited him as an important figure in the development of their own ideas and direction. What Coltrane himself may have thought about that is anyone's guess, since he did not live long enough to witness the newly emerging jazz-rock scene, however I'm sure he would have been both pleased as well as puzzled at his inadvertent role as high priest of modern jazz.

Just as A Love Supreme, Meditations is concerned with religious obsessions, or a "unity in life" as Coltrane himself once said. Certainly the personnel are impressive: Pharaoh Sanders (tenor saxophone, tambourine); Jimmy Garrison (bass); McCoy Tyner (piano); Elvin Jones (drums) and Rashied Ali (drums) -basically the musical equivalent to the American Special Forces.

Anyone familiar with Coltrane's more melodic work in the 1950's will be in for a bit of a shock, because Meditations is like nothing else he had ever done. From the first note played it's obvious that the listener is on a journey, one that can be as intense as it is confronting. Take "The Father and the Son and the Holy Ghost" as exhibit A, with its seemingly messy, almost atonal cacophony. One thing's certain, this ain't the Beatles we're listening to, since this is something far more cerebral and abstract.

"Compassion" is more melodious and has a beat the listener can follow. Tyner tinkers away on the keys in imaginative fashion, while Jones and Ali keep the mathematicians guessing. "Love" begins with Garrison's semi-oriental bass patterns, before Coltrane's tenor comes in, followed by the rest of the troupe, where soon it evolves into another one of those intellectual brainy compositions any fan of Garth Brookes would likely shudder at. On "Consequences" both Sanders and Coltrane really go for the jazz jugular, letting out more squeaks and squeals than a cave full of bats, only more frenetic. Tyner's playing is absolutely stunning throughout. The track segues into the closing number "Serenity," not the kind of serenity most people would recognize, but of the avant-garde variety, fraught with strange soundscapes and asymmetrical rhythms.

Meditations isn't an easy album to digest, mind you if you should ever want to get rid of any unwanted guests, you'll know which album to put on in future. Like Miles Davis, Coltrane was a restless spirit, forever exploring new frontiers; "transcending ordinary ways of musical speech" is how Nat Hentoff put it in the original 1966 liner notes. Whether you get this LP perhaps doesn't really matter, because just as the universe itself, it will always be there, whether we notice or not.

The Father and the Son and the Holy Ghost; Compassion; Love; Consequences; Serenity.