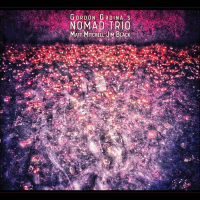 “Nomad" is the second track from JUNO Award winning oud player and guitarist Gordon Grdina's Nomad Trio debut album "Nomad," out January 10, 2020 via Skirl Records. A musician’s life is an inherently nomadic one, which can make things difficult when trying to get three of modern jazz’s most in-demand artists into one room at the same time. Vancouver-based Grdina had wanted to bring together pianist Matt Mitchell and drummer Jim Black for several years before their busy schedules allowed them to finally join forces. The results turned out to be well worth the wait, as "Nomad" is thrilling high-wire act of complex interplay and sparks-flying electricity. The name of the trio reflects not just the members’ travel-heavy lifestyles, but in the case of Grdina, Mitchell and Black it also points to the wandering tastes and wide-ranging inspirations of all three musicians. Grdina’s music explores uncommon convergences between adventurous jazz and improvisation, indie rock and classical Arabic music. His diverse projects bridge the divides between contemporary chamber music and avant-garde experimentation, combining unique artists and instrumentations to craft singular sonic landscapes in projects like Square Peg (with Mat Maneri, Christian Lillinger and Shahzad Ismaily), The Marrow (with Mark Helias, Hank Roberts and Hamin Honari) and his Quartet with Oscar Noriega, Russ Lossing, and Satoshi Takeishi.