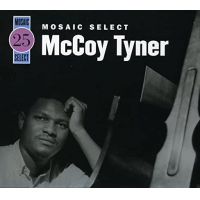 By the time pianist McCoy Tyner turned thirty in 1968 he'd already built a successful career as a sideman and leader. He got his first break with trombonist Curtis Fuller in 1959, but by the following year had joined up with saxophonist John Coltrane. The rest, as they say, is history. From 1960 through 1965, Tyner would be part of one of the most legendary quartets in modern jazz, appearing on seminal albums including Impressions (Impulse!, 1961) and the iconic A Love Supreme (Impulse!, 1964).

Following a handful of dates as a leader for the Impulse! label between 1962 and 1964, Tyner moved to Blue Note in 1967. The Real McCoy (1967) was the first of three releases that would firmly cement Tyner's post-Coltrane position as an important artist in his own right. Tender Moments (1967) and Time for Tyner (1968) further established his credibility as a strong composer in addition to his already inestimable talents as an innovative pianist.

Tyner's first three discs for Blue Note were largely small ensemble affairs, and even when he did expand to a nonet for two tracks on Tender Moments it was with a more conventional horn section. On a series of sessions recorded between August 1968 and September 1970 Tyner would begin to experiment more—not only with larger ensembles, but with less orthodox instrumentation.

The results of these seven sessions have been available over the years, but not all have been available on CD. Three tracks from the double album Cosmos (1970) saw the light of day briefly as bonus tracks on a now out-of-print CD issue of Asante (1970). The CD release of Expansions (1968) has also been out-of-print for some time. Only 1970's Extensions remains in print, making the three-CD Mosaic Select 25 box—which collects all seven sessions and sequences them chronologically—a welcome addition to Mosaic Records' ongoing reissue program.

With the exception of the two sessions for Extensions and Asante, Tyner's rhythm section remained bassist Herbie Lewis and drummer Freddie Waits throughout. They make for a surprisingly flexible team. On the August 1968 session for Expansions they're joined by trumpeter Woody Shaw, altoist/wooden flautist Gary Bartz, tenor saxophonist Wayne Shorter (who also makes a rare appearance on clarinet) and Ron Carter, who eschews his more familiar bass in favor of cello.

Tyner's influence on the Coltrane sound is in clear evidence here, where for the most part the emphasis is on brief sketches that set up extended soloing over repetitive modal vamps. That said, there's plenty of variety to keep things interesting. "Visions moves from firm-footed pulse to greater abstraction throughout its twelve minutes, and features a soaring and surprisingly outré cello solo from Carter. An African-centric vamp drives "Song of Happiness, where Bartz's wooden flute and Shorter's clarinet set the tune up before the two return to their main axes for the solo section. Tyner's lithe solo and turbulent accompaniment is, nearly forty years later, a given and an undeniable influence on pianists including Mulgrew Miller, Richie Beirach and Joey Calderazzo; but back then there was simply nobody who sounded like him.

"Smitty's Place begins with a brief nod to Art Tatum before turning into the session's fiercest tune, with fervent in tandem soloing throughout—first Tyner and Shorter, followed by Shaw and Bartz— ultimately breaking down into a free exchange between Lewis and Carter that's only barely anchored by Waits in the background. "Persina is a medium tempo modal workout that's the closest to pure mainstream and changes-based writing of the set. Cal Massey's ballad, "I Thought I'd Let You Know, closes the session and the album; a delicate ballad and the only non-Tyner tune of the box, it's given a chamber-jazz feel thanks to Carter and some barely audible horn work at the song's end that foreshadows the next larger ensemble session in April 1969.Two trio tracks that would ultimately appear on Cosmos—one from a November 1968 session that only yielded one tune, the other from a more ambitious April 1969 date—end the first disc. Both "Planet X' and "Vibration Blues are classic Tyner, though the former is more adventurous, featuring a mid-section stand-alone solo from Tyner that's a harbinger of things to come on his first all-solo album, Echoes Of A Friend (Milestone, 1972). Both tracks are strong ones for Lewis and Waits, demonstrating (as they do on the Expansions session) remarkable fluidity and flexibility. "Vibration Blues burns hard, but Lewis straddles the line between anchoring the rhythm with Waits and playing more responsively to Tyner.

Three tracks recorded from the same April 1969 session as "Vibration Blues open disc two would also be released on Cosmos. The trio is augmented by soprano saxophonist Harold Vick, woodwind multi-instrumentalist Al Gibbons and a string quartet. "Song For My Lady features a potent solo from Vick—an artist who, along with Gibbons, has been sadly overlooked. Tyner's energetic playing on "Cosmos is matched by Waits' most extended solo of the collection.

The string quartet is used primarily for the arranged sections, although its role is no less dominant for it. There's so much texture between the horns, rhythm section and string quartet on "Shaken, But Not Forsaken, that Tyner doesn't enter until nearly four minutes into the tune. The strings provide sharp punctuation throughout Tyner's solo, while Vicks and Gibbons layer a soft pattern underneath. With so many artists using strings to sweeten the sound, Tyner's approach is anything but saccharine.

Bartz and Shorter are back for the February 1970 date along with Carter (this time on bass). But it's Alice Coltrane's harp that adds a unique texture to the four tunes that would ultimately be released as Extensions. Tyner also reunites with drummer Elvin Jones for the first time since The Real McCoy, and the simpatico they honed through their years with the Coltrane quartet is in full force. Shorter contributes an extended soprano solo on "Message From The Nile that, in its paradoxically cerebral yet visceral approach, is clearly delineated from Coltrane's approach to the instrument.

Jones is responsive to Tyner's chart on "The Wanderer, keeping time but accenting the arrangement before heading into a fiery middle section where Shorter's tenor cuts a swathe through the relentless pulse. Bartz solos briefly, creating the construction that evolves as a lead-in to Tyner's extended improvisation. "Survival Blues is another modal workout, with a busy undercurrent from Jones and Tyner's fourths-driven accompaniment that, again, pushes Shorter to some of his best playing of the period. Coltrane's harp introduces the rubato tone poem "His Blessings, a surprisingly free excursion for Tyner that makes one wonder if his departure from the Coltrane quartet was premature.

Disc three begins with three tracks from a July 1970 session. A sextet featuring Bartz, flautist Hubert Laws and oboist Andrew White that's supported by the returning Lewis and Waits, it's even more ambitious than Expansions, a combination of rubato free-play, orchestrated melodic passages and soloing that ranges from the lithe (Tyner, Laws) to the muscular (Bartz). Given Laws' ultimate destination with his more listener-friendly CTI recordings, it's great to hear him pushing the boundaries here. "Asian Lullaby has a sing-song theme, but it's all business when Bartz steps up for another powerful alto solo. The more expansive and exploratory approach continues on "Hope, where Waits creates his own tumultuous maelstrom beneath White's best solo of the session, a free-time opening that leads into a more fervently swinging solo spot for Tyner.

The three tracks from the July 1970 session, first released on Cosmos, would be appended to the CD release of Asante, culled from the final session here and recorded in September 1970. While fans were, no doubt, happy to have them, the two sessions are so different that they don't really go together except in a case like this, where a chronological document charts the artist's path over the course of fourteen months.

Asante represented a number of firsts for Tyner—his first time with an added percussionist (Mtume), vocalist (Songai Sandra Smith) and guitarist (Ted Dunbar). It brings back Andrew White, this time on alto saxophone, along with a new rhythm section—bassist Cecil McBee and drummer Billy Hart. While there were allusions to African roots on earlier sessions, the four tracks from Asante more clearly reference them with the denser rhythms and Smith's often wordless vocals. Even the titles—"Malika, " Asante, "Goin' Home and "Fulfillment suggest the deeper ties to African culture being explored at the time. Tyner is even heard leaving the piano for wooden flute on "Malika, driven by the jungle pulse of Mtume's congas.

It's interesting to hear Dunbar's rhythm work during the solo sections of the mid-tempo title track. It's the first time Tyner had used another chordal instrument, but Dunbar's choppy rhythmic approach was a strong foil for Tyner's more ebb-and-flow approach. "Goin' Home is the closest thing soul jazz Tyner had done, while "Fulfillment closes the session—and the box—with a more earnest swing that brings things full circle.

Regardless of the different textural contexts heard throughout Mosaic 25's nearly three-and-a-half hours, underneath it all is the clear harmonic language that Tyner first innovated during his time with the Coltrane quartet. It's an exciting document of an especially fertile time in Tyner's career. It also represents Tyner's final sessions for Blue Note as a leader, before heading to Milestone for a decade-long run that would result in further innovations from this ground-breaking artist.

Tracks: Song For My Lady; Cosmos; Shaken, But Not Forsaken; Message From The Nile; The Wanderer; Survival Blues; His Blessings.