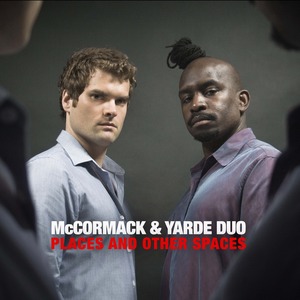 Places And Other Spaces

This arresting disc, the second from pianist Andrew McCormack and saxophonist Jason Yarde, is just the thing to brighten up a chilly autumn: warm, glowing and packed with great tunes—only one of which, George Gershwin's "Embraceable You," is a standard.

Along with the pair's debut, My Duo (Joy & Ears, 2009), the album is one of several compelling piano and soprano saxophone outings (Yarde also plays some alto) to come out of London in the last few years. Another was saxophonist Ingrid Laubrock and pianist Liam Noble's Let's Call This... (Babel, 2006). A mixture of originals and jazz standards, it was made when Laubrock was moving away from the off-piste jazz and funk of her Forensic quintet, towards the sonic experimentation and collective improv of her post-2007 work with Sleepthief, on Intakt, and Paradoxical Frog, on Clean Feed.

Places And Other Spaces is altogether less astringent; McCormack and Yarde, who wrote all the tunes, either separately or together, even evoke the pretty little melodies of the late Simon Jeffes' Penguin Cafe Orchestra at times. Yet with just two instruments between them (there are no overdubs), McCormack and Yarde generate more rhythmic heat, and worn-on-the-sleeve passion, than PCO, and the focus of their album is primarily on in-the-moment interaction.

That said, Places And Other Spaces has more than your average originals-centered album's quota of well-crafted themes. Most such recordings, if they include a token standard, make it the closing track on the CD for the good reason that it contains a melody superior to the tracks which precede it. Places And Other Spaces, however, could have got away with making "Embraceable You" the opener, so immediately do McCormack and Yarde's ten originals embed themselves in the memory's pleasure zone. 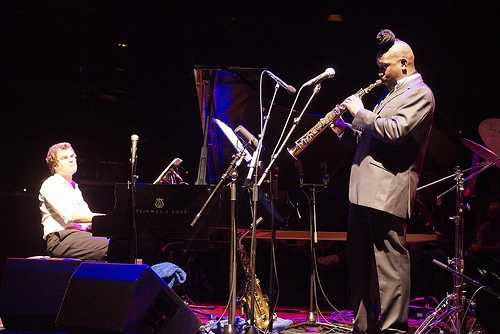 There are two co-written tunes—the bluesy opener, "D-Town," with its PCO-resonating piano motif, and the bittersweet "Other Spaces"—and four individually written pieces from each player. McCormack's "Spanish Princess" and "Antibes," and Yarde's "Flowers For Japan," are achingly pretty. Yarde's tune was written, it is reasonable to assume, in response to March 2011's Fukushima nuclear disaster, for Places And Other Spaces was recorded the following month. Yarde's dramatic "Dark Too Tight," with its chromatic lyricism and big interval leaps, and "Hill Walking On The Tynerside," inhabit more turbulent territory.

Students of sleeve note symbiology will notice that the McCormack & Yarde Duo is produced and mixed by Yarde and McCormack. Yarde is an assured producer, as he proved with his work on fellow Londoners Empirical's salute to reed player Eric Dolphy, Out 'n' In (Naim, 2009), which won the group the Best Jazz Act gong in Britain's 2010 MOBO Awards. He did not have to do much more for Places And Other Spaces than make sure the studio was set up right and the sound faithfully captured. The recording is as warm and vibrant as the performance.

McCormack and Yarde have played together since 1997, when they met at one of the weekly jazz sessions then hosted at London's Jazz Café by Tomorrow's Warriors. Together and separately, they have made some outstanding recordings, and Places And Other Spaces is among the finest.

Footnote: There is a connection, albeit an indirect one, between Places And Other Spaces and the aforementioned Laubrock/Noble disc. Places And Other Spaces may, through Yarde's presence, remind some London residents of Laubrock's pre-Sleepthief oeuvre. In the mid-2000s, both saxophonists were featured in composer Tony Haynes' culturally-inclusive big band, Grand Union Orchestra, at the time it was performing Haynes' If Paradise. The passionate, gospelized alto saxophone duel between Laubrock and Yarde in the suite's "Collateral Damage" will be etched in the memory of anyone lucky enough to hear it.

And more good news: The late September 2011 release of Places And Other Spaces coincides with the long awaited release of If Paradise (it was conceived getting on for ten years ago) on Haynes' Red Gold label. This time out, the altos are Tony Kofi and Phil Todd—and they are cooking too.

Tracks: D-Town; Spanish Princess; Dark Too Bright; Antibes; Epilogue; Hill Walking On The Tynerside; Other Spaces; Holding Pattern; The Spaces Before; Flowers For Japan; Embraceable You.