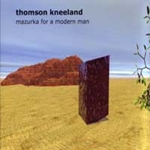 Thomson Kneeland makes a creative surge on Mazurka For A Common Man, with wide-ranging music that captures the bassist's skills as a writer—a trait in evidence right from his first CD, The Voice of Blood (Weltschmerz Records, 2001). He went on to record three more albums with his band, Kakalla—documenting, in tandem, Kneeland's ability to write for a quartet/quintet lineup in several idioms and his skills as a bassist. Kakalla was his band for eight years before, Kneeland moved to New York City in 2003.

Kneeland has a knack for assembling exciting bands. Kakalla was hot and so is this outfit. The music on Mazurka For A Common Man is part of a larger body of 14 tunes that the band recorded; yet another prolific assemblage, with several eclectic moods and styles pervading. The context is illuminated by the interaction of the band, one that has grown through years of playing together, as they read off each other and stir up a cauldron of ideas, where challenging music leaps from shape and permutation, pulse and tempo change.

"Dithyramp" is a showcase for the ensemble, with its constant shifts; led in by trumpeter David Smith and alto saxophonist Loren Stillman, the rhythm is pumped by Kneeland and drummer/percussionist Take Toriyama, as a sedate head gets a swaying body. Guitarist Nate Radley's radiant lines are a tangent, but for just a little while, as the music soon explodes. Kneeland's throbbing textures and harmonics are euphonic, and a forerunner to Toriyama's creative intuition, as the percussionist hoists the rhythm into a scintillating progression.

"Rhapsody," one of the more soul-stirring tunes, turns out to be a fitting tribute to Toriyama, who passed on two weeks after the music was recorded. The emotional pulse tugs at the heart strings, as Smith establishes an introspective mood that flows deep into the veins of the melody. He comes back later to extrapolate the theme, but the ground he has laid is generative, with Radley and Kneeland working it to purpose, shifting into gentler, succinct motifs that underline the dynamics set by Smith.

Kneeland makes a welcome return after a rather long absence from recording as a leader; hopefully there will be more to come, and soon. It is never too soon.