By Greg Camphire
November 23, 2009
Sign in to view read count 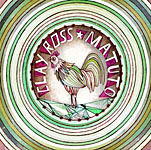 In Brazilian Portuguese, matuto signifies a backwoods country hillbilly. Guitarist, vocalist and South Carolina native Clay Ross knows a thing or two about these types of folks, and finds common ground between their counterparts across the equator on Matuto, his eclectic debut for Ropeadope Records.

Ross is something of a polymath, handling guitar, vocals and lyrics as well as the Brazilian cavaquinho guitar and kashakas percussion. His vision for this project is unique; with a mix of originals and covers that melds many musical traditions under one big, open umbrella. He's also assembled a killer band, including appearances from guests including master Brazilian percussionists Cyro Baptista and Ze Mauricio.

The opener, "Recife," mixes heavy funk with Appalachian fiddle jams and a Northeast Brazilian lilt, befitting the capital city after which the tune is named. Ross' guitar twang and Itai Kriss' flute create some flavorful unison melodies before nailing a tight ensemble finish. The expert percussion on "What a Day" sounds authentically Brazilian from the downbeat, supporting Ross' colorfully satirical lyrics. Lines that reference brushing teeth, underwear and taking pills recall the transgressive absurdity of some of David Byrne's work, as well as tropicália artists like Tom Zé and Caetano Veloso, who inspired the Talking Heads singer.

A handful of interpretations of American traditional songs display Ross' wide-ranging influences, and are fitting additions to this project. "Banks of the Ohio" begins as a plaintive vocal and accordion ballad, before entering New Orleans territory courtesy of guest drummer Richie Barshay, who also appears on the bluegrass-flavored "Church Street Blues." "John the Revelator" is a highlight, done with a skeletal arrangement of vocals over explosive Brazilian rhythms. Ross' voice sounds convincing in this context, like a real Southern preacher should, while the one-stringed berimbau resonates in a strangely effective turn as the main blues riff.

"Zydaco Mondo" is a tasty piece of instrumental funk, with heavy flute work by Kriss in tandem with guitar and fiddle; it wouldn't be out of place on a 1970s album by Brazilian fusionists Dom Um Romao or Joao Donato. "Maria's Lullaby" takes a left turn into The Beatlessque pop, albeit underlined with a fresh Brazilian beat, creating a modern blend somewhere between Os Mutantes and Radiohead. "Feel, Like a Song" ends the disc with another twist, a piece of cinematic ambience that recalls Bill Frisell's approach to ballads.

Oftentimes, cross-cultural fusions of this kind sound better on paper than in performance, but Ross displays an honest combination of his own background in American roots and pop music with the incorporation of genuine Brazilian styles like maracatu. In doing so, he proves himself to be a modern matuto, spanning continents with a down-home sensibility and an explorer's curiosity.