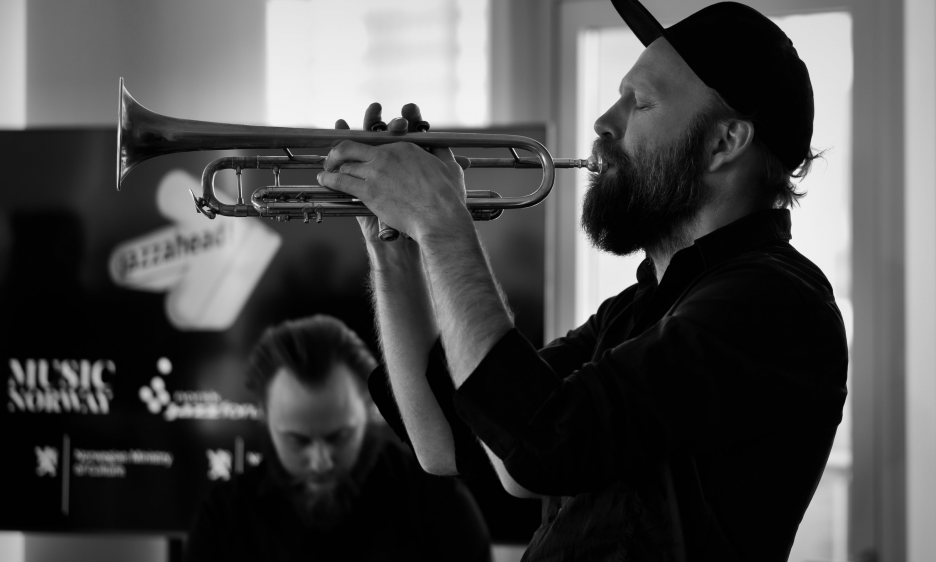 In a potent foretaste of what promises to be a Scandinavian-heavy jazzahead! conference in April, the Norwegian Consul General Harriet E. Berg—in collaboration with Norsk Jazzforum and Music Norway—graciously opened her New York City residence for a private concert by Norwegian trumpeter Mathias Eick with keyboardist Andreas Ulvo and violinist Hakon Aase.

For the fortunate assembly, Eick's melodies were like the catered spread, composed of savory layers nuanced by hints of sweetness. Against the reverberant backdrop painted by his amplified bandmates, and in contrast to the metallic verticals of the Manhattan skyline through the windows, Eick's acoustic trumpet elicited raw lyricism. "Children" was the first of only two tunes, both from his last record, Ravensburg (ECM Records, 2018). A dreamlike introduction by keyboard and violin spun tales of breath before the album's most unforgettable, full-fledged theme took shape. Improvising over supernal harmonies, each musician pulled from the vine at the peak of ripeness. Eick also humbly showcased his patience as composer and performer. Sparkling, nostalgic, and infused with innocence, this timeless music flew higher than any skyscraper.

"At Sea" spun equally iridescent threads into a sailor's knot of beauty. Intended to evoke the travels of Norwegian immigrants in search of a new life in early America, its frayed edges were like an archival map for the ears. Ulvo's soulful textures and Aase's fluid solo evoked the bittersweet hopes of those fateful journeys, each with its own story to tell, and made the urban sprawl following the all-too-brief concert feel that much more jarring: the overbearing march of history, fighting for dominance in the battle of noises that is our present century.

Followers of ECM Records as well as recent European successors like Hubro and Jazzland know that Norwegian musicians are leaving an indelible trail across the shifting tectonic plates of jazz. Norway is a guest country this year at jazzahead! in Bremen, Germany from April 13 to April 28. The conference will include a dedicated "Norwegian Night" on April 25 with figureheads Frode Haltli, Kristin Asbjørnsen, and Thomas Strønenand streaking the event with ice and fire.