By DAN BILAWSKY
February 18, 2020
Sign in to view read count
With a viewpoint colored by vast experiences—formative classical and jazz encounters while growing up in Sweden and Italy, immersive education at Boston's Berklee College of Music, finishing work under the masters at the Thelonious Monk Institute of Jazz, and real-deal maneuvering in New York and beyond—bassist Massimo Biolcati plays and writes with a globalist's perspective. While best known for sideman gigs with peers like Beninese guitarist Lionel Loueke and giants of the music several years older, such as trumpeter Terence Blanchard, vocalist Luciana Souza and saxophonist Ravi Coltrane, Biolcati has actually branched out to cover myriad aspects of the music business. In 2009 he created iReal Pro—an app that's become ubiquitous in jazz education circles and individual practice regimens—and in recent times he's donned the producer's cap in a variety of settings. Now, with the release of these two albums—the first on the Sounderscore imprint, both produced by Biolcati—this cooperative catalyst and positive polymath is poised to draw even greater attention. 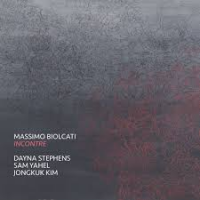 Twelve years separate the release of Biolcati's leader debut, Persona (Obliqsound, 2008), and this follow-up. And a number of factors, beyond time, drive a wedge between the two releases—personnel lists are completely different, the split aesthetic of Persona ("Motion" vs. "Stillness") holds no sway here, and Incontre is less concerned with texture than its predecessor was. But Biolcati's appreciation for organic cohesion and his gifts in the groove-making department help to connect these albums.

Joining forces with longtime friend Dayna Stephens (on saxophones), occasional playing partner Sam Yahel (covering piano and organ), and relative newcomer Jongkuk Kim (on drums), Biolcati is in peak form. Harmonically adept, melodically aware, and casually playful in movement, the bassist presents with a fluid yet firm sound that often smiles and winks its way through a song. Opener "Hello, I Lied," one of four originals on the playlist, immediately makes that point and sets the tone with some rhythmic and metric sleight of hand. As with much of what follows, its wrinkles prove to be key selling points.

Regardless of where compositional credit rests, Biolcati claims all of this music as his own. He slyly reframes Charlie Chaplin's "Smile" with some help from Stephens' piquant soprano and Yahel's simmering organ, surrounds Tears For Fears' "Everybody Wants to Rule the World" with a hustle-and-flow atmosphere, accessorizes the bodies of tradition with the personalities of the present during Thelonious Monk's "Boo Boo's Birthday" and Charles Mingus' "Duke Ellington's Sound Of Love," and allows beauty to rise above on the Kenny Wheeler-influenced title track. Whether recasting a classic or putting something new in the spotlight, Biolcati and his band mates always manage to bond while brewing something tasty and unique. 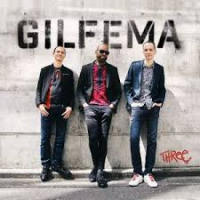 Biolcati and Hungarian drummer Ferenc Nemeth have often lined up behind Loueke, both in terms of placement as support in the guitarist's own band(s) and in the general pecking order in the jazz hierarchy. But these three actually stand on fairly even ground when they get together. Having forged their friendship at the Thelonious Monk Institute of Jazz early on in the new millennium, debuted on record as Gilfema with an eponymous release in 2005, delivered a guest-enhanced follow-up three years later, and criss-crossed the globe under Loueke's name at various points since, this multi-national co-op is always in step. And as their plainly-titled third album points out, Gilfema's internal form of expression and communication is like no other.

Three takes off with Loueke's "Têkê," a number strongly colored by the composer's West African accents and driven by propulsive interplay. An all-too- brief take on Jimi Hendrix's "Little Wing" follows, eliminating the continental and cultural gap(s) separating Africa and America in less than three-and-a-half minutes. And then Loueke injects his vocals into the mix on "Lé," an Afro-Caribbean excursion with a sunny disposition and easy appeal. Through it all, Biolcati and Nemeth create a web of sonic and rhythmic intricacies that figures prominently into the success of the music.

The eleven tracks that make up the balance of the album continue to demonstrate deep connections while moving further afield in sound and substance. A straight- line sensibility and tight-knit pocket forwards Nemeth's hyper "Happiness," breezy overtones float across "Fleuve Congo," and good-natured grooves and cheery charms carry "Aflao" along. Loueke, Biolcati and Nemeth have mastered a shared language, and its an argot that nobody else is likely to truly pick up on. No matter how you slice it, Gilfema is wholly unique.