By Patricia Myers
August 24, 2011
Sign in to view read count 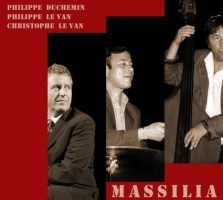 Born in Toulouse, France, Philippe Duchemin began classical piano studies at age nine, and was attracted to jazz at 15. Self-taught, he spent eight years studying his idols, Fats Waller, Erroll Garner and Oscar Peterson. Drawing from this classical and jazz background, Duchemin delivers a brilliant balance of melodic exploration and pulsating rhythm from first to last note on Massilia. His agility and creativity are absolutely dazzling as he merges classical roots with modern jazz, blues and soul, conveying the joyous swinging energy of Peterson, his main influence.

The title track is Duchemin's homage to the Roman-era name for the port city of Marseilles in the south of France. The rigorous stop-tempo and gospel feel is perfectly punctuated by Philippe Le Van on drums and Christophe Le Van on acoustic bass, twin brothers from that city.

In a change of pace, Duchemin's satisfying exposition of Chick Corea's infectious "Armando's Rhumba" offers bass and percussion solos and a driving keyboard conclusion. Perhaps the most surprising track is Duchemin's playful and Peterson-like arrangement of Jerry Fielding's Bewitched television theme, "Ma Sorciere Bien Aimée" ("My Beloved Witch"), an affectionate nod to the 1960s-era American series that remains popular on French channels. Another salute to American composers comes in the medley of a pulsating "Caravan" and freely-flowing "Ol' Man River."

Duchemin's interpretations of two Oscar Peterson favorites on the final tracks encompass the ingenuity of his style. The reinvention of "Cakewalk" and "Hymn to Freedom" solidly fortifies Duchemin's reputation as heir to the Peterson throne. This stunning album is yet another reason to convey that title.