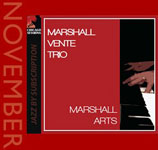 Marshall Arts is an entertaining and engaging album by versatile Chicago pianist Marshall Vente. The recording features pieces written for each of Vente's two separate and highly distinct piano trios, the Jazz Trio and the Tropicale Trio. The album as a whole is divided into three sections, with the first three tunes featuring Vente's American jazz roots, the middle four tunes consisting of Brazilian-influenced tunes and the final three tracks returning to post-bop style jazz. Ever the musical chameleon, Vente's playing and compositions flow smoothly between each genre resulting in a recording that is both creatively dexterous and musically cohesive at the same time.

Vente's Jazz Trio can be heard on the first four and last three tracks on the album. Also including bassist Scott Mason and percussionist Isi Perez, these three musicians bring a high level of ensemble interaction and communication to every melody and improvised solo they play. One of the trios biggest highlights on the album, both compositionally and performance wise, is the opening track "Bill Evans Tune for RA." The melody of the tune is exactly as the title suggests; a Bill Evans-style waltz that features many of Bill's signature melodic and harmonic choices as well as several of Bill's favorite 3/4 rhythmic variations. Vente's solo on this tune is one of his best on the recording. It is not fancy, more reminiscent of early to middle period Evans, but Vente's strong sense of time and melody come together in a creative tour-de-force to which the late pianist would have no doubt tipped his hat.

The other side of Vente's musical coin is his Tropicale Trio, which is featured on the middle three tracks of the album. The trio consists of Jim Batson on bass and Luiz Ewerling on drums, both of whom are highly accomplished musicians in their own right and as a pair bringing a heightened sense of time and feel to these three pieces. This trio is featured on two out of the three songs that make up the "Brazilian Suite," which is made up of three shorter pieces, "Bossa '68," "Brasilian Folk Song" and "Samba Into the New Age." As each title suggests, the suite consists of pieces that were inspired by three different Brazilian music genres, bossa-nova, samba and the traditional folk style. The trio switches between each of these different grooves with ease and Vente's playing sounds just as comfortable and creative in the Brazilian styles as it does in a jazz context.

Marshall Arts is filled with memorable melodies, highly-creative improvisations and energetic ensemble interaction. Though it was originally released through the Chicago Session subscription service, due to the popularity of the series' releases including this one, all of the labels titles are now readily available.