By JOHN KELMAN
September 5, 2014
Sign in to view read count 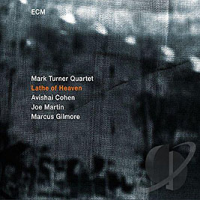 Given that he's participated on no fewer than six recordings on ECM over the past six years— two this year alone, with drummer Billy Hart's sophomore effort for the label, One is the Other (2014), and pianist Stefano Bollani's career-defining Joy In Spite Of Everything (2014)—it's no surprise to find Mark Turner finally getting his own date on the venerable German label. That Lathe of Heaven is the saxophonist's first recording under his own name alone since 2001's Dharma Days (Warner Bros., 2001) only speaks to an approach to recording that is as painstakingly well thought-out as Turner's approach to music-making; he may take his time with everything he does, but the results are always worth the wait.

For his first solo album as a leader in 13 years, Turner takes the opportunity to expand the growing number of New York-based musicians being recruited for ECM in recent years, with trumpeter Avishai Cohen, bassist Joe Martin and drummer Marcus Gilmore all making their first appearances on the label with Lathe of Heaven. Focusing exclusively on his own writing, Turner brings four new compositions to the session, in addition to revisiting two previously recorded pieces. A more extended look at "Sonnet for Stevie"— written, perhaps, as the result of Turner's participation in the SFJAZZ Collective's tours and recording of Live In New York Season 8: Music of Stevie Wonder (SFJAZZ, 2011) and first appearing, in a more amiably swinging form, on Hart's One is the Other—is more ruminative in nature, with a barely recognizable quote from the soul/R&B superstar's "Blame It on the Sun." If it does, indeed, explore Turner's relationship with the blues as he claims, it's a far more prismatic one, given both Turner and his chord-less quartet's deconstructive approach.

Similar in its oblique melodism, Lathe of Heaven's "Brother Sister" nevertheless possesses a more definitive backbeat—at least initially—from Gilmore than either the version on SFJAZZ Collective's Live 2010: 7th Annual Concert Tour (SFJAZZ, 2010) Horace Silver tribute, or the version on Year of the Snake (ECM, 2012), from Turner's collaborative FLY trio with Larry Grenadier and Jeff Ballard. But, as is true with much of Lathe of Heaven, there is often much more than meets the ear, as brief passages of unaccompanied instruments—alone or, at one point with Turner and Cohen harmonizing in wonderful synchronicity, the saxophonist adopting a grittier, breathier tone than usual that melds perfectly with the tarter texture of Cohen's horn—lead to subtle shifts in rhythm as Martin at one point adopts a double-time line while Gilmore remains to anchor the slower groove, but elsewhere holds the pulse, allowing the drummer more freedom to move. With Turner and Cohen engaging in both solo and in-tandem improvisational forays, rarely has so much been created from such a relatively spare compositional concept.

When there is no chordal instrument, there is both a greater opportunity to explore, unencumbered by predefined harmonics, and greater responsibility, as the horns are completely naked and exposed. That Turner and Cohen have extensive backgrounds working in chord-less trio contexts—Turner with Fly, and Cohen in his own trio that has just released Dark Nights (Anzic, 2014)—means that they understand both the responsibility of creating vertical harmonic contexts in collaboration with both Martin and Gilmore (whose melodic capabilities are especially on display here) and the need to pay particular attention to tone and timbre. On "Year of the Rabbit"—Turner's continuation, perhaps, of concepts first demonstrated on his title track to Fly's Year of the Snake—Cohen delivers a set-defining solo that soars from a lightly gritty lower register to stratospheric leaps possessed of inimitable purity, as he builds a lengthy feature predicated as much on the repetition of simple motifs as it is more extreme and seemingly effortless virtuosity. A brief, idiosyncratic unison line leads to Turner's solo, which covers similar territory while at the same time, with the saxophonist's intervallic leaps and pure altissimo, carving out its own space.

As cerebral as Turner's music can be and as considered as his compositional constructs are— oftentimes building surprising significance from the smallest of concepts—Lathe of Heaven manages to stir the soul as much as it challenges the mind. Deep, dark and ever substituting implication for overt expressionism, it's that very tension created by Turner's quartet—more often than not, resolving in the most unexpected fashion—that makes the saxophonist's first album as a leader in 13 years one worth celebrating. He may take his time between releases, but if an album like Lathe of Heaven is the result, then perhaps there's something to be learned from Turner's patience, and his clear commitment to quality over quantity.

Lathe of Heaven; Year of the Rabbit; Ethan's Line; The Edenist; Sonnet For Stevie; Brother Sister.