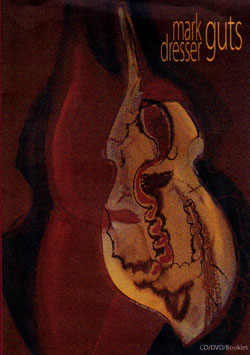 He doesn't receive anywhere near the publicity given to his friend, and fellow bassist, William Parker, but make no mistake about it: Mark Dresser is a giant in the free jazz / new music continuum and has been so for years. Dresser has been keeping a still lower profile since moving from New York back to San Diego to work in academia at University of California at San Diego's music department.

The material on Guts—which is subtitled Bass Explorations, Investigations and Explanations—is organized as a "triptych" by the Kadima Collective. This means the package contains a DVD (informational), a CD (solo double bass performances without overdubs) and a very informative 16 page booklet which explains, in great detail, much of the background and many of the technical features of the package.

First up, the DVD. Anyone who has had the good fortune to witness Dresser perform in the last 20 or so years can attest to the notion that he is a master of "extended techniques" on the contrabass. Many of these are mind boggling—both visually and aurally. Others, however, are subtle to the naked-eye and one of the beauties of this DVD is how it reveals and explains such "hidden" techniques. The DVD itself is divided into three sections: the first is a conversation between UCSD new music composer Roger Reynolds and Dresser. Reynolds and Dresser collaborated recently—and the conversation goes a long way toward explaining what that really means. The second part is an interview, without questions, with Dresser. He explains some of his background, early inspirations—guitarist (Jimi Hendrix, bassist Charles Mingus)—and methods. The final part is the real joy of this release: over an hour of what amounts to a master class in extended bass techniques, skillfully shot and explained in great detail, with the bonus of downloadable files as well.

Dresser arrived at many of these techniques through trial and error (especially the ones using the bow). Although intuition plays a large part in his process of experimentation, he always seeks to understand the techniques from a scientific and mathematical perspective: the better to break them down for his own, and our understanding.

Some of the technical stratagems Dresser covers include a comprehensive look at the production of harmonics, both with and without the bow. Dresser's understanding of harmonics and how they can be applied in music is staggering. He does seemingly impossible things with natural harmonics, false- harmonics, combinations of the two and the "harp harmonic" series. He also covers his startling double glissando technique, which is fascinating to both eyes and ears.

This DVD amounts to the same effect as a master magician showing you all of his best tricks in full detail. Possibly the most intriguing magic of all is Dresser's mastery of sub-tone production. Through much experimentation, he has developed a way to, for instance, finger the note C on the A string, and with a combination of vertical bowing and increased bow pressure, produce C one octave lower! Once he figured out how to do this, Dresser visited a physics laboratory to find out how it was possible. This instructional DVD is highly recommended to double bassists and anyone interested in the state of contemporary bass playing.

Second up, the CD. This was recorded using both a custom, five-string double bass and two of Dresser's four-stringed basses—both of which have magnetic pickups installed in the neck at strategic harmonic overtone locations. Dresser can activate these pick-ups with a switch and, using a volume pedal, amplify them. The pickups allow for eerie, mostly upper register effects that seem to come from a different instrument—if not planet. The recording, with one exception, was made at the acoustically pristine Conrad Prebys Hall at UCSD. The one exception was recorded in Dresser's office, of all places.

There is too much remarkable music for a blow-by-blow accounting, so here are some of the highlights. To begin with, although it might be hard to believe, there are no overdubs on the disc. "Dermus," the piece recorded in Dresser's office, offers up insanely virtuosic out-of-the-box bow work—including scraping, and rubbing the instrument—artificial harmonics, and an eerie series of clicking on the strings with his wedding ring while producing ghostly overtones. "Innard Pulse" features outlandish arco bagpipe-type effects, long, held double-stops and the "beating" effect of sliding near-unisons.

"Duohandum" explores Dresser's mastery of bi-tonal hammer-ons in "just-intoned" harmony. It also contains passages of impossibly low, rattling notes where the pressure of his left hand transmits though string vibration. "Visceras" is filled with otherworldly sounds from the bow juxtaposed against wicked one and two handed tapping, double-stops and piercing arco harmonics and multi-phonics (all at once!).

Just to show you this isn't all "out-to-lunch" stuff, "Ekoneni" is described as a groove piece, and the description is completely accurate. It dances along with a joyous, African-inspired choreography. You can hear not just the bass, but whistles, horns, harps and drums all going on . How Dresser pulls this off, without overdubs—even after watching the DVD—is still a mystery for the ages. Recommended.