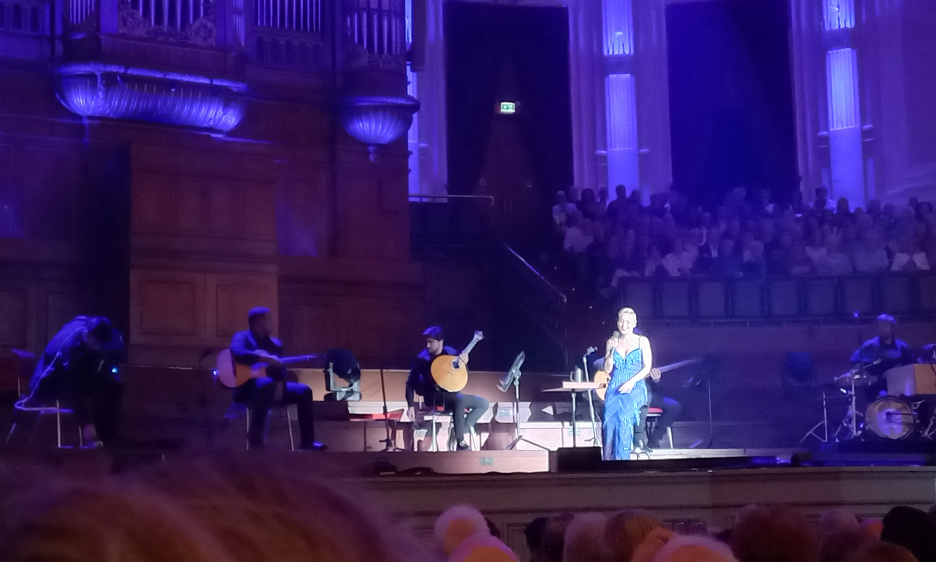 When it comes to expressiveness, passion, technique, and sheer beauty of voice, probably there is no female singer today to equal Portuguese singer Mariza. It's rare to see a singer today who invests herself or himself so much during a single performance. Mariza is the main exponent of Portuguese fado, the equivalent of the American blues or Macedonian chalgia, music that was born in the neighborhoods and taverns of Lisbon in the 19th century but it has its origins in Africa and other oversea lands that were part of the Portuguese empire. The songs carried the sense of saudade or a nostalgic sadness, longing, and love. But Mariza is someone who has modernized this music thus breathing new life into it and elevating its profile worldwide.

And on a beautiful evening, Mariza truly shook the dust off of Amsterdam's historic Concertgebouw concert hall. Full of pizzazz, she looked and sounded tremendous, stalking the stage in a long, blue glittering gown and revealing a voice that can switch from soulful melancholia to jollity. Backed by a very able and versatile band consisting of Luís Guerreiro on Portuguese guitar, Phelipe Ferreira on acoustic guitar, Dinga on bass, João Frade on accordion, and João Freitas on percussion, for two hours she sang her most beloved songs and more, establishing an emotional rapport and obviously, a magical connection with the audience from the very first note she sang. In the cinematic opening, in the darkened hall, a spotlight glowed and faded as she sang "Estranga Forma De Vida," a song from her latest offering Mariza Canta Amalia, which is her tribute to the Portuguese legendary fado singer Amalia Rodrigues. Even though the whole concert was sung in Portuguese, her passion, longing, love, and dynamics were easily translated by the virtue of her starling performance strengths.

At moments she was seductive, provocative, and gentle, and then outspoken and fiery Mariza was constantly transforming herself on stage, tearing open her heart and soul to offer them to the enchanted audience. The vast repertoire consisted of songs from every corner of her career starting from songs from Amalia Rodrigues' repertoire "Lagrima," "Cravoz de Papel," or "Semente Viva" from her self-titled album, "Alma" from Mundo, (Warner Music, 2015) "Meu Fado Meu" from Transparente, (EMI, 2005) and others. From the outset, the stunningly gorgeous Mariza took possession of the full breadth of the stage, prowling her way from one end to the other, turning around to talk or joke with the musicians or the audience that surrounded her and otherwise drawing a full house into her embrace. The mesmerized audience clearly enjoyed her complete immersion in the music.

But then the audience got to hear the more introspective side of Mariza's art when she sang "Chuva" accompanied only by guitar. Then both the guitar player and Mariza were joined on Portuguese bouzouki on songs such as "Meus Olhos Que Por Alguem," "Ha Ha Palavras," and "Senor Vinho." The audience was then treated to a barrage of other excellent songs such as "Maria Lisboa," "Rosa Branca," and "O Gente Da Minha Terra."

Mariza ended the show with an encore that showcased her powerful vocals with "Insensatez" and "Barco Negro." And "Barco Negro," a fan favorite, amounts to a celebration of a singular voice as the band and Mariza used this song to improvise and extend it endlessly. Propelled by tribal drums, the song has everything: a huge and soaring voice, radiant tone, dramatic delivery, and crescendos that never seem to end. The dynamic performance simply enthralled the audience. It was all drama, emotions, and entertainment. They loved it. They love her.